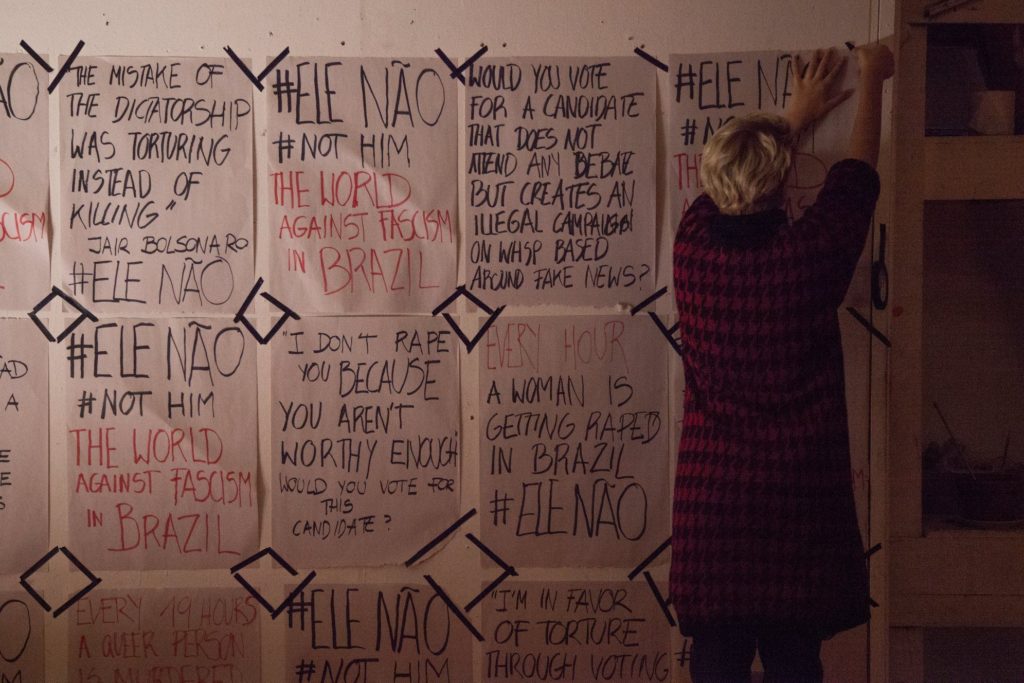 “The Trump of the Tropics,” they call him. But really, he’s worse. “Bolsonazi” is another nickname. He’s openly homophobic, misogynistic and racist. As Brazil’s elections dawned, feminist activists protested, “Ele Não!”

Not him. But now Jair Bolsonaro is the newly elected President of Brazil. And his far-right supporters, empowered by his vitriol, are carrying out violent attacks on women, gays and other minorities.

So what are you going to do about it?

Marina Cortes, a performance artist from Brazil who is studying at SAIC, watched with horror as the election unfolded in Bolsonaro’s favor. She was alarmed by what Bolsonaro’s election would mean for her country’s democracy, especially for her friends and loved ones. Frustrated by the ignorance and inaction she witnessed in her Chicago circles, Cortes grew determined to raise consciousness in the Windy City.

For Cortes, art and activism are deeply intertwined. Her parents were activists in Spain and instilled in her a passion for social justice. Even as a high schooler, Cortes dove into organizing, coordinating street actions in Sao Paulo with Amnesty International and performing a manifesto against homophobia in Russia at Madrid Queer Pride 2016. This sense of political purpose shows in her performance art, which doubles as social practice. Among her artist inspirations, Cortes cites Brazilian Neo-Concrete artists from the ‘70s,  like Lygia Clark, Lygia Pape and Hélio Oiticica, who built community and created transformative collective actions in response to the military regime.

A week before the election, Cortes was slated to perform at No Nation Art Gallery and Tangential Unspace Lab. Political intervention was on her mind. Asking the gathered crowd of artists and spectators, “How can we support local organizing in Brazil from afar?” Cortes sparked a dialogue about how Chicago artists could mobilize in support of Ele Não. For an hour, we sat in a circle and brainstormed actions, considered the respective merits and limitations of various organizing tactics, and grappled with questions of complicity, privilege, social media activism and allyship.

“The discussion at No Nation was really important because it was pre-election,” Cortes reflected. “Now, more people know what’s happening because the election just happened, but there’s also this apocalyptic mood, this sense that it’s too late to take action.”

But despite the defeatism around her, Cortes was only further galvanized. She pointed out that the need to protect marginalized communities in Brazil is even more pressing, especially given the rise in hate crimes under Bolsonaro’s watch. Homophobic violence, for instance,  is at an all-time high in Brazil. 1 LGBT person is killed every 19 hours and the average lifespan expectancy for trans people in Brazil is 32 years (the average of the general population is 75 years).

Following the election, Cortes posted a call on Facebook to organize workshops at Chicago art institutions. Already, she’s plotted upcoming workshops at DFBRL8R, Comfort Station, Flat Iron and Sullivan Galleries. Her interventions will take advantage of art institutions’ resources and visibility to raise awareness about the rise of fascism in Brazil.

“Usually their audience at events—artists, teachers, scholars—are people who have powerful voices,” Cortes revealed. “So it’s a very intentional and targeted channel to spread the message and facilitate change.”

Cortes demonstrates the importance of fighting in the trenches wherever you are. If you’re the queen of memes, help the revolution go viral on social media. If reading is more your speed, go to your local library and check out books by Brazilian poets and historians. By drawing on the platforms and networks we each already have access to, we can all play our part to disseminate information and mobilize against fascism.

At the same time, Cortes acknowledged the risks and limitations of allyship from afar. Global activism/slacktivism can become performative or overstep the agendas of grassroots organizers.

“I think it’s important to give voice to my friends who are on the front lines, who are the minorities—queer, trans, black, indigenous,” Cortes underscored.

Throughout her series, Cortes will center local artists, collectives and organizers from Brazil, including virtual guest performances and lectures by Gustavo Bonfiglioli, from A Revolta da Lâmpada, and Ana Giselle, from coletividade.namibia, and Latinidad art scholars like Daniel Quiles, a professor at SAIC, will also be on hand to provide additional sociocultural context.

So what can artists do to fight the rise of fascism?

“Artists have a voice and the privilege of working with our voice,” Cortes considered. “We add beauty to society by using our voices.”

Marina Cortes will be hosting workshops at DFBRL8R on the November 25, at Sullivan Galleries (SUGS) in conversation with the Unidx group, a Decolonization series on November 26,a workshop at Links Hall in February 2019 and workshops at FlatIron and Comfort Station, for which the performance schedules have not yet been confirmed.