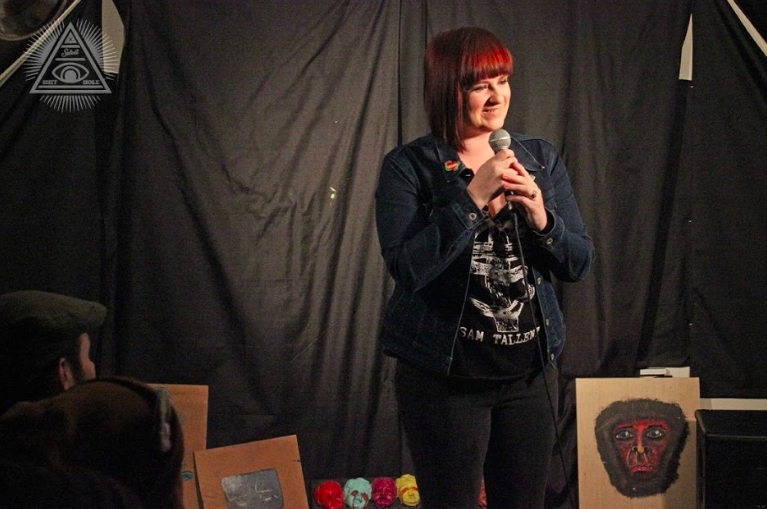 Today, artists are more open about their process of recovery. Marc Maron has helped demystify the shame of addiction on a large scale with his podcast WTF. There are artists who are challenging misconceptions of alcoholism on stage. Locally, there are artists who want to make a difference and better serve other addicts.

I spoke with a handful of Chicago theater artists practicing sobriety. Here are five ways we can foster an inclusive and supportive community for those in recovery:

1. If you are selling beer, have water.

Have water. If you’re planning on only selling beer and wine, sell water, too.

“I performed at a big fundraiser event and they didn’t have anything to drink other than alcohol,” Eileen Tull recounted, a solo-performer and theater teacher. “I waited in line and asked ‘Do you have anything to drink other than alcohol?’ and they said, ‘Well, I guess there’s a water fountain.’ Even if I wasn’t an addict, the idea that you don’t offer people water is just stupid.”

It seems like a basic ask, but every performing artist I’ve interviewed encounters this scenario regularly.

2. If you are paying in drink tickets, have more non-alcoholic drink options.

Drink tickets are a common perk for performing artists. They are a classic gesture of goodwill and a form of compensation. One ticket equals one drink at the bar.

“I’m sick of getting seltzer with my drink ticket,” said Emilie Modaff, an actor, musician, and fellow Scapi contributor. “I don’t need to be catered to, but I need to be welcomed.

Even for audience members, drink tickets are a common incentive to VIP packages for patrons. Nothing says Very Important Person like asking for drink tickets to cover ginger beer (tip: it *usually* works!)

A great way bars can accommodate sober patrons better is by offering mocktails and other specialty, non-alcoholic drinks.

“It’s kind of like having vegetarian and vegan dishes on a menu,” Nah said. “They don’t have to, but it’s a nice thing to do.”

Bartenders, we still want to support you! And personally, any place that offers tea wins my heart.

Many places that refer to themselves as safe places don’t cater well to recovering addicts.

“They are safe for particular groups of people and I think sober people need to be in there and included,” Modaff said. “People who don’t make a safe space for sober artists are missing out on a group of artists.”

Comic Whitney Wasson has taken to creating a sober performance space by producing the variety show Serenity Now! at The Crowd Theater. The monthly night features all sober performers and asks its audience to be completely sober when entering the venue.

“The priority was making this a safe place for anyone who was at any point in their recovery,” Wasson said. “A show where they can come and be safe, where they can enjoy something that should be a normal experience: going to see a show, getting a comedy experience outside a bar.”

4. If you’re running a show, don’t ask the audience to drink.

Tull puts it succinctly: “If the only way people are going to have fun at your event is if they get wasted, you need a better event. If your show is only good if it requires everyone to drink, it’s not a good show.”

5. If it’s your show, be professional.

The national conversation about what “professionalism” means in the entertainment industry isn’t new to Chicago’s theater community. The rise of Not In Our House and the fall of Profiles Theatre sent shockwaves through the community and helped us hold people accountable for their behavior.

A similar search defining “professionalism” in the performance scene and DIY spaces hits sober people, who are confronted with workplaces where their vices are poured or passed freely.

“I got asked to do a show and it was a storytelling show, and all five producers were stoned,” Tull said. “It was like, ‘Oh my God, these are not the conditions I want to work under.’”

It gets to a point where it can be exhausting. Not only is the artist preparing for the show, but they’re shoring up extra willpower in case a show breaks bad.

“At 30 days [sober], I performed at a house party in very small space, and people started passing around a joint,” Nah recalled. “I was like, ‘Oh no! I’m trapped here!’ And it’s so funny to think about how in the past, I would have been so excited that it was happening.”

I’m not suggesting a Reefer Madness-level of prohibition. Instead, understand that the territory of performing arts as careers, and that sober artists would like to be seen as equals and not anomalies to what’s considered “a fun night out.”

Ultimately, a sober person has to hold themselves accountable in these situations. The onus is not on the show and its producers for leading to a potential relapse.

These underserved performers, who choose to be under-served, just wish to be seen.

Five small adjustments like these can make a huge difference in making people with invisible struggles be welcome in your space.

Actor and comedian Hannah Starr sees the invisibility of sober artists not as an erasure, but as a slow process of sober theater artists coming out of anonymity.

“In a way, we infiltrated the performance community,” Starr said. “We were already performing. But then we rose in numbers. And now we’re combining our powers and creating space.”

Serenity Now! is held at the Crowd Theater on the third Saturday of every month. Show starts at 10 PM. Tickets are $10 and available at the door and include a free La Croix.

Emilie Modaff can be seen in Red Tape Theatre’s production of In The Blood, running through February 23.

Em Haverty
Em Haverty (they/them/theirs) is a freelance writer for Scapi Magazine. They are also a writer and performer of personal essays, solo pieces, sketches, and is known to design a puzzle from time to time. In addition to writing about intersections in comedy at Reclaiming Laughter, they collect old footage curios for the YouTube channel VHShambles. Connect with them on Facebook or Twitter.

Em Haverty
Em Haverty (they/them/theirs) is a freelance writer for Scapi Magazine. They are also a writer and performer of personal essays, solo pieces, sketches, and is known to design a puzzle from time to time. In addition to writing about intersections in comedy at Reclaiming Laughter, they collect old footage curios for the YouTube channel VHShambles. Connect with them on Facebook or Twitter.
More from ImpressionsMore posts in Impressions »
More from UndergroundMore posts in Underground »