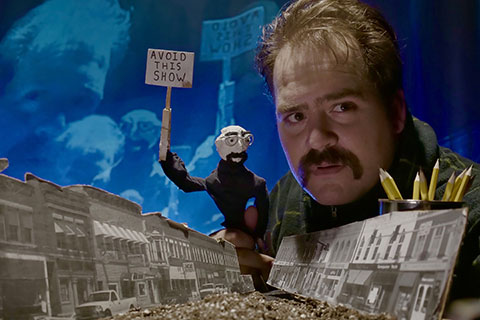 Puppets, Capitalism, and Déjà Vu: A Profile of Tedium and Other Sensations

Audience members seat themselves in the first room, and face a long banquet table decked out with a plastic feast intermingled with instruments—a giant turkey, a trumpet, a gallon of milk, chocolate syrup, and cowbells all grace the table. Two televisions face each other, one mounted above the audience facing the stage and the other positioned high above the stage. As the lights dim, the banquet table begins to shake ominously, and the piece Other Sensations launches into its exploration of freedom, choice, and American capitalism.

While Other Sensations was designed as a companion piece to Tedium, it stands on its own as an expression of the inescapable nature of capitalism and American consumer culture. Mocrep said that examining the un-escapable linear structure of time discussed in Tedium led them to examine similar structures prevalent in society.

“We started thinking about the nature of freedom and choice, both as they exist as capitalist decoys… and also as real tangible moments of hope and transcendence,” Mocrep said. “The tension between these two is where the piece lives, a tension that is intellectual, theoretical, paradoxical, but also visceral and emotional.”

Throughout the piece, Mocrep implemented music, a television commercial for a buffet franchise, a communal dish of chocolate syrup, and the repetition of the letter “A” 350 times. They also used a non-linear structure for their piece, slipping in and out of non-progressive “scenes.” Since scenes had no resolution, and there was no plot or other device moving the piece forward, the audience experienced time and its rate across a spectrum: at moments when there was entertainment and change, time moved quickly; at other instances, like the monotonous, almost excruciatingly long series of “A’s”, it moved very, very slowly.

“In this way any scene could be the beginning or end of the piece, giving the audience—and us!—the option to experience multiple or no endings and beginnings throughout the event,” Mocrep said. “In a way, [it] transcended the objective prescription of felt time.”

As far as puppets go, Mocrep said that they used their materials—instruments, visuals, video, and electronic music—as non-traditional puppets in the universe they built for the piece. Indeed, by the end of the show, it really feels like the two televisions have taken on their own characteristics and are acting as almost gods within the realm of the play, providing the moral compass for the people within the show.

The result is an eerie look at the myth of the American dream.

In one scene towards the end of the piece, the television calls out jeopardy questions that range from nonsensical to existential. “Have you been ahead of your wants?” the television asked.

“Our wants are always ahead,” answered ensemble member Lia Kohl.

As Other Sensations draws to a close, the lights come up and a voice comes over the speaker urging audience members to move to the next room, commencing a countdown for the beginning of Tedium.

The next room feels slightly more sparse, or perhaps just less centered on one specific image. The beautiful set pieces, with puppets and illustrations by Sam Deutsch and Bernie McGovern respectively, are distributed about the space, and will become arenas for each section of the show’s narrative—a hanging chair, a cardboard box, a pane of glass, and a hanging pegboard all stand alone in front of a backdrop of a giant moon.

Tedium was first written by Mickle Maher as part of a collection of short stories, and was later adapted by Shoshanna Utchenick and Maher and performed at Theater Oobleck in 2001. Neo-Futurist ensemble member Dan Kerr-Hobert saw the show when in college, and met Maher through various projects. When the Neo-Futurists again decided to participate in the Chicago International Puppet Theatre Festival, Kerr-Hober thought, “I’d like to do that Tedium piece.”

The piece was newly adapted for this production, and unlike the original production where there were three or four puppeteers, Kerr-Hober took on all the tasks and imagery along with the role of the narrator.

Tedium tells the tale of a play written by a man named Greg that is so horribly boring and long and, well, tedious, it should be a complete failure. But, magically each night, at two separate instances in the show, the audience is swept with feelings of what the narrator deems déjà vu, which transports them into deep, content nostalgia.

Tedium examines the human concept of time and existence as a gift, rather than dull and tedious survival until death—the monotony of life is suddenly rewarded when you experience consciousness on a greater plane. The moment when, as the narrator puts it, theatre “touches the mind to the current of the eternal.”

“[It’s] this world of magical conjuring in the theatre, that type of chemistry that happens beyond your control when a production comes together… beyond your ability to actually conceive it,” Kerr-Hober said.

By collaborating with Mocrep, Kerr-Hober said they hoped to create just a slight feeling of déjà vu mentioned in Tedium. However, the two groups worked totally separately.

“It was never actually a conversation,” Kerr-Hober said. “Sometimes when you have a conversation like that it feels like it’s jinxing it. We hoped that the hemispheres of the show would interact in a way that was unpredictable and meaningful.”

Tedium and Other Sensations ran through January 26. For a complete list of upcoming shows and schedule for the Chicago International Puppet Theatre Festival, visit their website at www.chicagopuppetfest.org.

More information on Mocrep can be found on their website, www.mocrep.org. Mocrep will be performing with the Civic Orchestra of Chicago at the Symphony Center on April 18.
Visit The Neo-Futurists’ website at www.neofuturists.org for shows and events. Their next show, Remember the Alamo, begins previews on February 28, 2019. And, of course, you can always catch The Infinite Wrench every Friday and Saturday at 11:30 PM, and Sunday evening at 7 PM at their space at 5153 N Ashland, Chicago, IL 60640.

Maggie Ward
Maggie Ward (she/her/hers) is a Contributing DIY Theater Writer at “Scapi.” She also works as a freelance writer for the cooking and home magazine, “Taste of Home.” Along with freelance writing, Maggie is an actor and singer/songwriter based in Chicago.