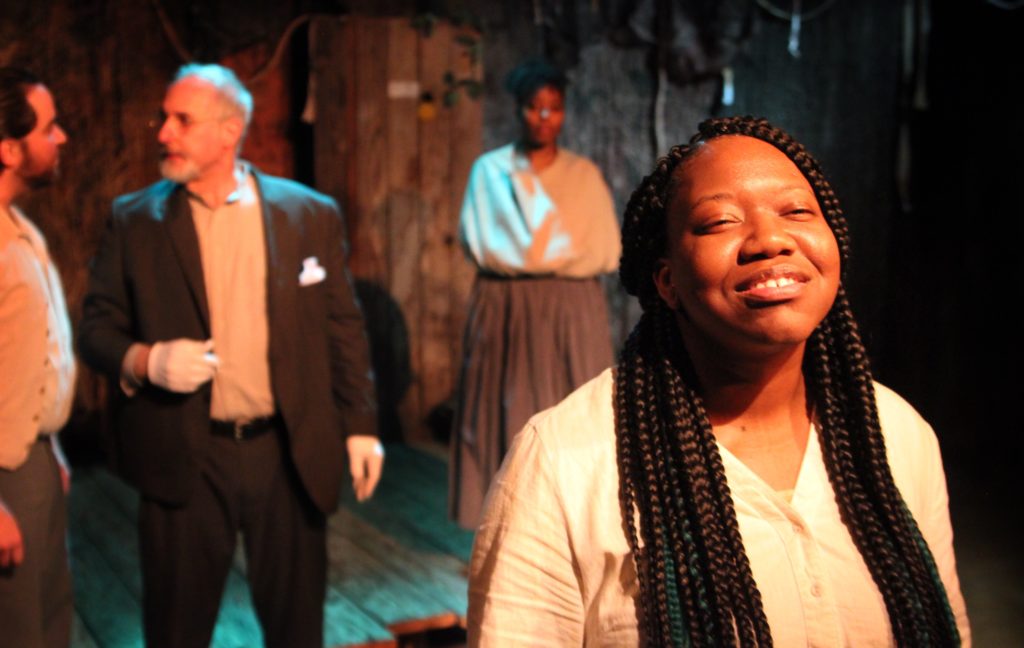 Everybody Is Mixed: An Interview with Lauren “LL” Lundy

Lauren “LL” Lundy has only been with Chicago theatre mainstay MPAACT since 2014, but has had a meteoric rise in that time. From her beginnings as a Group Sales Coordinator, to her current position as Managing Producer and three-time director for the company, LL has been an instrumental part of MPAACT’s continuing work in bringing “Afrikan-centered theatre” to Chicago’s stages. LL’s most recent project has been directing the premiere production of Swamp Baby, a 2009 script from writer and dramaturg Aaron Carter. With the play now running until March 3, we sat down with LL to talk about her work, the company’s work, and the social work still to come.

How did Swamp Baby come to the table for MPAACT?

Lauren “LL” Lundy: [Playwright] Aaron Carter has been a friend of the company’s for a while. He predates me with relationship to the company. I honestly think we just asked him if he had a script, and he said, “I do, and it’s never been done,” He sent us Swamp Baby, and I fell in love with it immediately and pushed really hard for the company to produce it.

[Carter] was briefly in Los Angeles when we first started rehearsals…but I always had his ear, he always made himself available for any kind of questions or clarifications. He knew that it was a possibility that he was going to do some rewrites, but he didn’t know if that was actually going to manifest or not. So we treated [the play] as somewhere in the middle of new and published, because it has been finished for so long, and he hasn’t been actively working on it.

The show has been in development since 2007. What about the story still feels relevant now, in a different social climate?

LL: Besides the fact that it was written ten years ago, it takes place in 1904. The core of the play is this whole thing of what it is to be mixed, and have mixed blood, and even back in the day that was seen as, ‘that makes you the freak.’ Black and brown bodies were put on display because of that quality, and I think that holds true today. Today, we are led by somebody who believes any body not white is bad. But we also live in such a time that everybody has something else in them, everybody is mixed. It’s not just about being pure anymore, and never was.

In what way does your previous work directing devised theatre come into your directing of a scripted work like Swamp Baby?

LL: Being able to be in a room without a script––which by the way, is terrifying for me, but I learned so much from that process––and being able to open up the floor to ideas, knowing that it’s a very open space in which we all help each other learn…[that] helps any director. I’ve always run a room that way, in which everyone has a say. I don’t have eyes over the entire stage the entire time. “Tell me how this is interpreted for you.” “Tell me for you, somebody from a completely different background and completely different experiences, how does this land for you?” “Help me shape this world so it makes sense for everybody and not just me.”

You talk about building a world. Swamp Baby is notable for its fantastical characters and settings. How did you go about building that world with your team?

LL: I did as much background research as I could to what the time was and where they were––1904, Louisiana––what was happening in the world, how black and brown bodies were treated. My cast is black, with the exception of the two white men. It was knowing where these people come from, what their baggage is, what Louisiana actually feels like. The girl who is playing Swamp Baby [actress Myesha-Tiara] is actually from Louisiana, so talking through that became a jumping off point.

My designers, much like the actors, are welcomed in the room from the very first day, and are welcome to share their opinions on how the world functions. We built a swamp, but the whole show does not take place in the swamp. For the actors to be grounded in that world is one thing, but to build the set we had a little more room to play in that imaginary world.

In addition to work with MPAACT, you have also been a freelance director for other companies in Chicago. How can theatre companies support freelancers, and in what ways do you feel supported by MPAACT?

LL: [MPAACT] couldn’t have been more open. They 100% backed the work that I wanted to do, it was no different than any other show. I never felt like I couldn’t go to any company member and ask for their opinion, or their assistance. I call company members all the time to say, “I don’t know what to do here, can you help me?” Specifically for people who are just starting out, welcoming them and letting them know that yes, this might be your first show with us, but it doesn’t mean we’re going to treat it any differently. We’re going to trust that you’ve done the work and that you’ve earned this space.

The play began previews on the 18th, and has been running a few weekends, accumulating reviews and audience response. What sort of feedback on performances is most beneficial to you?

LL: I watch every show, because I view it as a learning opportunity. I don’t think I could learn something from the show if I didn’t sit in the choices that I’ve made for the next five or six weeks.

The most valuable thing is sitting in that room and watching the audience respond. For so long in rehearsal, I assume “this is a hilarious moment, the audience is definitely gonna laugh at this.” Seeing if that actually is true or not confirms, or does not, something about me, and how I’ve approached the scene.