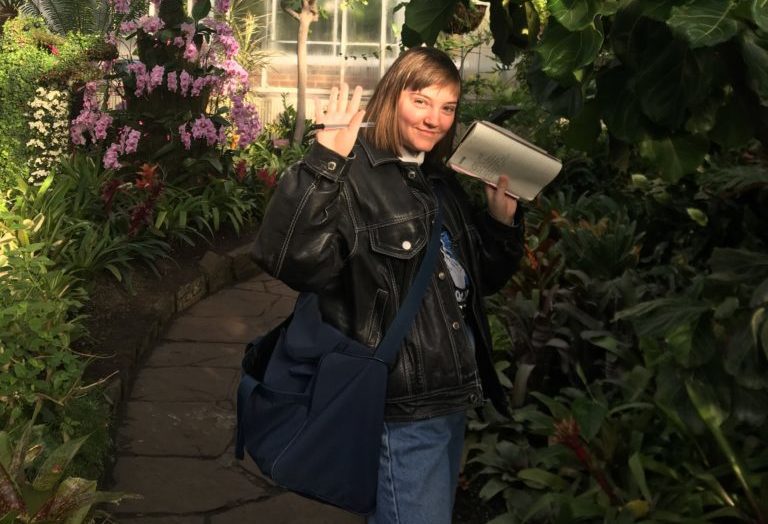 Jessie McCarty and I met in matching blue outfits. We were here to talk about their work at The Runaways Lab Theater and their new play Analysis of Bones as Metaphor/Affection as a Space Vacuum. They had with them a full journal of notes and thoughts and a copy of “Soviet Science Fiction” by Isaac Asimov. What started as a conversation about an experimental theater company quickly moved into a deeper talk about mediocrity, humor, and what defines success.

Hi Jessie, so tell me about Runaways Lab Theater.

Jessie McCarty: Our motto is “Primo Weird Theater” and lately we’ve been focusing on our lab series.  We just had a reading of Trapped In Elon’s Mansion by Joe Bagel. It was a Shakespearean verse about Elon Musk and Grimes and the Twitter drama that happened last summer. That was at The Crowd Theater just last weekend. I directed that, and Gannon Reedy [Runaways Lab Theater managing and artistic director from 2016-2018] played Elon. [You can read the rest of the cast right here: with Mike Smith replacing Antwon Funches]. Coming up we have a Black Lab curated by Jo Schaffer.

On the Runaways website it says that you are for “Audiences that hate theater”, and also for, “Audiences that love theater but are tired of it.” Can you unpack that a little bit for me?

McCarty: For me, I would say that we are trying to change the way people see theater, what theater can be. Again, theater can be something as simple as getting 30 people into one bathroom to watch me light a candle,blow it out, and then make everyone go home. At Runaways we are definitely trying to change the audience’s perspective. With Elon, we messed with the audiences, forced a little interaction. I set up a projection with stage cues and I made them clap several times for no reason, and once someone started talking, I made them clap again. We were toying with the idea of just cutting the play off and being like, “The play is over, y’all have to leave now!” But I do feel like there is a fine line between being mean to your audience and appreciating that they’re there.

Absolutely. Could you tell me more about your work and what you do with Runaways?

McCarty: I’m very interested in dialogue and the process of people talking to each other in  unnatural ways. I’ll have two people (or two things) talking who 1) would probably never be able to have a conversation and 2) are discussing something that would never happen in this natural way. I had done this play with Runaways called Is This Play Good? Do You Like It?: A Tribute to a Young David Duchovny. It was these two people getting ready for a play and then all of a sudden, the tech person gives  a shout out to David Duchovny, “May his youthfulness from The X-Files live forever!” I like dialogue that holds depth and theme to what they’re discussing, but pitched in a very fun, campy way.

How did you get involved with Runaways?

McCarty: I first joined because I had attended their most recent Doing Drugs & Dying in Space, a theater festival they do every year. Plays are submitted and to be accepted they require someone dying, in space, and someone doing drugs. The festival made me look at theater in a different way, which I would say, could be the point of the company and the point of my writing in general. Joining the company changed the way I want to write, which is really inspiring and exciting.

What do you do as a company member?

McCarty: I helped produce The Adventures of Astro-Man by Dan Mozurkewich, shown at Voice of the City last July. With assistance from Maggie Vaughn, I made sure the cast and crew were supported, I had things in order, and I helped set up the tax forms. I try to assist with production and money management behind scenes.

And when it is your own work?

McCarty: When it comes to my work in Runaways, I like to include PowerPoint. Even the worst PowerPoint you’ve ever seen is really fun to see on a huge projection with 60 people. It’s like, “This PowerPoint is awful, why are we looking at this as part of a play” and that’s it. No explanation. For my David Duchovny play, there was just two minutes of PowerPoint of pictures of David and I made people watch it and it was really funny. But… I’m sure a lot of people didn’t think it was funny.

Can you tell me about your newest play?

McCarty: Yes! I’m working on a full length play called Analysis of Bones as Metaphor/Affection as a Space Vacuum. The two main characters are a black hole and a character ‘A’, but the black hole is never really onstage and never really has a physical form. A is constantly trying to get him to be near her, but there’s no possible way to get near a black hole without being sucked into it or being destroyed when it is being destroyed. There’s no possible way to stare down the barrel of infinite space and be like, “Please love me back, please care about me.” Because I feel like the grand universe doesn’t really care about you, and you can’t really beg anyone for affection. That’s not really a fun or campy plot line but…

I like that sort of nihilism. What did you want to speak about with Analysis of Bones as Metaphor/Affection as Space Vacuum?

McCarty: Oh! Can I go to my journal? I had written a journal entry: “In Analysis of Bones as Metaphor, I write about falling for a black hole knowing it will burn out with the rest of them. Then I compare our burning relationship to broken bones, bones to orgasm, orgasms to chemical experiments. A lot of the first part of the play is in direct correlation to the text The Science Delusion which is a pseudo-science text by Rupert Sheldrake. It’s also a combination of notes from a lecture by Andrew Yang at the School of the Art Institute. It’s a collection all of these different influences: How black hole theory can be directly correlated to metaphors for sexual intimacy or emotional intimacy of wanting someone. It started out as me writing about this one particular person, and then as that person left in real life, I made that character leave.

Writing about affection is very odd. One day I am sad and trying to write this happy scene and then the next day I am feeling really good and hear about one specific fact about black hole theory, or say, the Hawking effect, black hole radiation, and it’s harder to hone in on what the dialogue is. I’m trying to contextualize science in a theater way. Or theater in a science way.

You mentioned that you write science fiction theater. I think that’s not a genre that theater often explores.

McCarty: …And often not well. If it’s sci-fi theater, it’s often campy. It can’t be something as simple as someone talking and giving facts about one particular subject and then intertwining that with how their day at school went. I think science is very mundane in a way, and I don’t see why theater can’t be that way too. How I talk about science fiction is that I’m just talking about science in a different kind way, that’s it. It’s not like writing about going to the moon or destroying the earth with a laser beam. It’s as simple as: I really liked someone, and they left me. That’s like how a black hole forms and dissipates– an explosion, which  is like orgasming, and then it goes away, still. It could be something like that. What I’m working towards is writing about science like a script and putting it onstage.

Kind of a hard segue, but tell me about some of your inspirations. Besides David Duchovny, of course.

McCarty: A lot of comedy-based people inspire me. I really like Joe Orton, especially his biography (by John Lahr) A lot of people were angry about his comedy method; he didn’t care about his audience at all. I feel like I’m more inspired by works than I am by artists… One of my favorite movies is I Married an Axe Murder. It’s almost bad. It’s good, but not that good. Which for some reason I feel like I could strive to be that. Like, “Oh this work is good, this work is funny, but it’s not… that funny. They could have tried harder with this performance, but they didn’t…”

McCarty: I feel mediocrity is hilarious.

McCarty: Adam Pally is also one of my favorites, he has a podcast called “Vino Diesel” through UCB. But the thing is, he doesn’t care about the podcast and he often plans it the day before. He just doesn’t care. And I find that so admirable. I find that humor of being subpar very respectable. That, I’m trying, but not trying hard enough, a shitty PowerPoint for instance, or as a play…I find that not exactly the top level of comedy, because there’s obviously so much more.  Not that I’m striving to be subpar.

I think it’s really interesting that you almost sound like you are, and now I’m thinking about why that is bad.  Why are we both trying to defend that? Why is being ‘good’ not enough?

McCarty: I like the concept of being subpar because you have to make people think about it. “Why didn’t I like that? Why, for some reason, did I love that?” When you have an audience contemplate why they took the time to intake your media, I feel like that itself is successful. If someone bought my play and said, “Well it was good, but it wasn’t as sexual, or funny, or poetic as it could have been.. and honestly, it wasn’t that funny at all.” I think that’s fine, because you bought the damn book. I want the audience to wonder if I’m good or not, and I’ll (jokingly) be like, “Not really!” I am pro-nuance, pro-negative. I find that funny.

Jessie’s work can next be seen at LVL3 on March 21, curated by Gabi Welsh and Shelf Shelf Store. They will be reading from their play I Don’t Know How To Talk About My (whispers) Queerness.