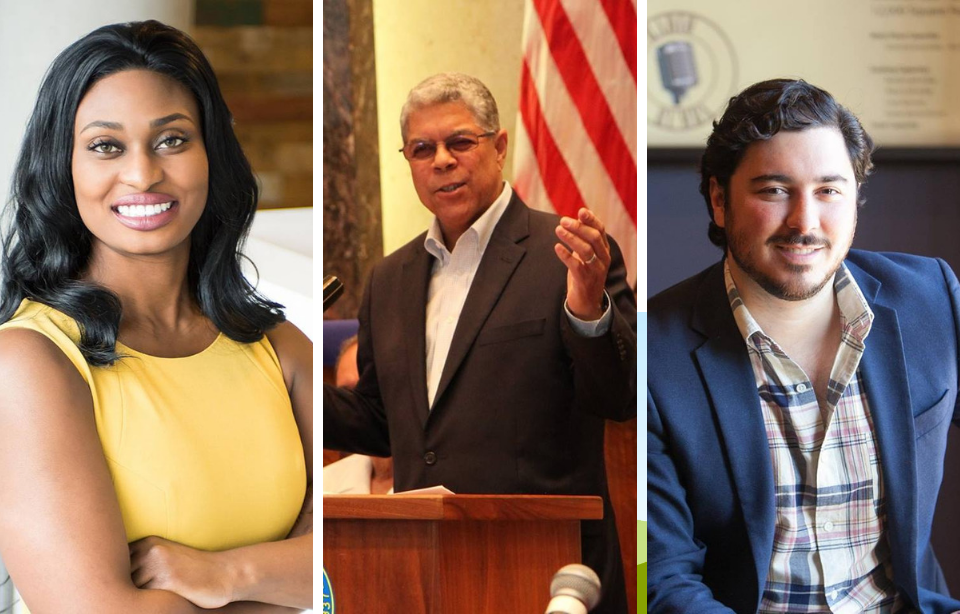 The election has officially been called in Maldonado’s favor. However, Siaw and David Herrera—the third candidate for 26th Ward Alderman—are seeking answers to a multitude of issues, complaints, and red flags that were raised during the election cycle.

“We have a Democracy, but not really,” Herrera said in an exclusive Scapi Magazine interview. “It’s a system that benefits the status quo, that favors machine politics.”

Herrera and campaign staff received complaints of voter intimidation at many of the senior housing facilities within the Ward.  They were told that certain senior citizens were threatened with removal of their housing if they didn’t vote for Maldonado. The campaign is awaiting the release of sign-in records and security camera footage to verify these and other reports of intimidation.

“There are several people who I know moved from the state years ago who sent mail-in ballots,” Herrera’s campaign manager Lauren Weber said while being interviewed by Scapi. A source at the Board of Elections told the campaign that they witnessed Maldonado’s campaign staff come in with about 250 mail-in ballots to deliver for their candidate. Herrera, through personal complaints and anecdotes from residents in the neighborhood, is aware of 3-4 operatives who collected over 100 mail-in ballots each, which could have garnered around 500 ill-gotten absentee ballots. Both Siaw and Herrera have received numerous complaints throughout the election of the Maldonado campaign paying cash to its staff for each mail-in ballot they brought in.   There’s even complaints and stories of staff paying voters directly.

Siaw said that she heard from voters and residents in the 26th ward while campaigning that the Maldonado campaign staff led them to believe they were signing a petition, when in fact they were filling out a request for a mail-in ballot. People arrived to vote on February 26 to find out that a mail-in ballot was already submitted in their name, claims Siaw.

On voting day, an election judge was removed from a 26th ward polling place by a Board of Election Officer for encouraging people to vote for Maldonado as they received their ballots according to NBC Chicago. All election judges are assigned to their polling place by the ward committeemen of their respective political party. The 26th Ward Democratic committeeman is Roberto Maldonado, the incumbent running for reelection in the very same ward.

“Aldermen should not be committeemen if they want to have integrity,” Siaw said during an interview with Scapi Magazine.

The night before voting day, official-looking notices were found on the front gates and doors of homes falsely claiming that their assigned polling place had been moved.

“This is voter suppression,” Herrera said in responses to the notices. “We’re up against machine tactics. Maldonado is the only one who would benefit from this.”

Two contradictory state laws make this specific situation almost impossible to address. All provisional and mail-in ballots must be counted by March 12, but the deadline to request a recount is March 5.

Siaw is officially contesting the primary election and having her lawyers prepare a lawsuit, arguing that she is being denied her state and Federal constitutional right of due process. Knowing that this endeavor is sure to be lengthy, costly, and unlikely to lead to an investigation, she is still pursuing charges.

“I want to make sure we had a fair election and that the voices of the community were heard,” Siaw said. “This election left a sour taste in their mouth of where they were raised.”

Both campaigns have filed complaints with the Chicago Board of Elections and State’s Attorney’s office and continue to conduct more research.

“At this point, it’s just about justice.” said Weber.

“Many politicians are calling themselves Progressives now instead of Democrats because of how Chicago politics has tarnished the party’s name.” said Siaw.

Chicago has never been known for it’s clean politics, and this local race shows how the contradictory laws and systems put in place by the Chicago Board of Elections can place undue burdens on challengers, and prevent transparency and accountability in local government.