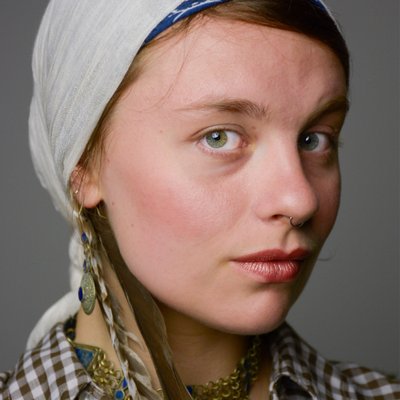 On March 15, Scapi Magazine sat down with singer-bassist Lyn Rye to talk about experimenting with deadlines, collaborating with other artists, Chicago’s enthusiasm for blurring genres, and using the music in her heart for social justice.

Rye’s released her new album, “Roots of Rye,” on January 28, 2019. The tracks resulted from an experiment Rye began in October 2018, where each week she produced a new song, along with a corresponding, one-minute video.

She described her album as post-gender and post-genre, composed almost completely of bass, vocals, and Ableton.

“I was not intending to make an album from these songs, I was just in my bedroom making songs, keeping myself honest with this schedule of once a week,” said Rye. “I didn’t have it in my mind as an album, so I really allowed myself to experiment with the genres, with beatmaking, with all these different sounds.”

Her lack of intention to create an album gave her a sense of freedom, as did the weekly time constraint. Usually, the planning process is intensive and detail-oriented, but having had only seven days to write and record each track saved her the extensive preparation.

“I wanted to force myself to be really loose, and just giving myself a week to do each song was liberating,” said Rye.

Another goal behind the album was to learn how to record and make beats using Ableton. She figured using it for specific, tightly-deadlined projects would save her from falling into the vast information hole one might find themselves in while learning such a dynamic program.

For the first few weeks, Rye had no problem holding herself to the schedule. She was excited and committed. Then, she contracted viral meningitis and strep throat back-to-back, which left her bed-ridden for a month.

Rye recorded “Contagious,” the fifth track on the album, during the strep throat era, when she couldn’t sing. That’s why the song’s vocals are spoken word.

“And then it was, what else are you going to do in bed but mess around on your computer? You wouldn’t believe how much of this album I made literally in bed,” said Rye. “People talk about bedroom pop, but this is like, actual, literal bed pop.”

Come December, Rye started collaborating with other artists. She internally referred to it as “Duo December.” After collaborating with musician Joshua Virtue to make song six, Rye realized that her weekly projects should be an album, and that the rest of the songs should be collaborative. Rye enforced the same seven-day deadline onto every person she created with.

“It helped bring authenticity to genre-bending, because it could be two people’s music worlds existing in the same space,” said Rye. “The con is that collaboration is scary. You give up control and you open yourself up to risks. And I love it.”

It seems that Rye was driven by the urge to take risks, to enter the unfamiliar and experiment with new processes. Prior to “Roots of Rye,” she understood beat making to be inaccessible. She thought that producing such music was out of her bassist realm and exclusive to the world of percussionists. But, Rye had been inspired by beat makers since teenhood, when Bjork’s “Vespertine” changed her world.

“I think I’m a very rhythmic person, but I’ve never been a percussionist,” said Rye. “It was so refreshing to feel like something that was inside of me was finally getting a voice through beat making.”

As a versatile bassist who plays with folk, jazz, hip-hop, and rock musicians, Rye is someone who can create genuine newness. Being able to create beats, sing, play bass, and collaborate allowed her to escape any boxes threatening to confine her music to genres.

When asked how creating in Chicago affects her work, Rye referred back to the genre-bending prevalent in her post-everything album. The city is thick with music and art scenes enthusiastic to blur their lines and borrow each other’s elements.

“Chicago has given permission, to me as an artist, to do all the genre-bending that I want to do,” said Rye. “I love to do everything, then soak it all up. In my own music, I want to be very defiant of these categorizations.”

As in her music, Rye defies categorizations in her identity. She is an artist, but also a social justice activist who is currently working with Interfaith Community for Detained Immigrants. She’s particularly involved with providing a loving and caring presence in the child detention centers of Chicago.

Migrant children who arrive at the US border without their legal guardian, even if they’re with the adult they’re supposed to be with, like an uncle or sister, are detained in what are essentially prisons, like the centers in Chicago. They are forced to give their biometric information to the US government, and interrogated for information used to deport the adults they’re trying to reunite with.

“It’s a deeply traumatic experience for most children who go through this,” said Rye. “In my opinion, at least, it’s part of this deeply, deeply problematic and violent, carceral state that we have.”

“For me, as a person, the political is personal and the personal is political,” said Rye. She talked about collaborating artist Sacramento Knox, who also does social justice work.

“He and I both walk the same walk of trying to organize within our communities and being the best artists that we can be,” said Rye. “They’re not separate, they’re the exact same thing.”

For Rye, they’ve always been the same thing. In college, she co-founded an ensemble called Liberation Music Collective. It was a 16-piece jazz group that wrote and performed “protest music,” meaning each song had its own social justice message.

“That satisfied a certain part of that urge to have music be socially active and socially conscious,” said Rye. “Hopefully it is a reflection of this life that so many of us live. Blending a social awareness with an artistic urge.”

During one college Thanksgiving break, Rye joined protesters at Standing Rock. On November 20th, major police violence broke out. She spent the entire next day playing a tinny and broken banjo from a man named Pickles and got more from the banjo than she could ever from her conservatory education.

She described returning to the conservatory as jarring and utopian. The stark contrast between the violence at Standing Rock and the campus bubble students lived inside of, far from social consciousness, affected her permanently.

“There was something that I still needed from that bubble, but at the same time, where are you in the rest of the world? Please, please come,” said Rye. “We need people who have instruments and who have music in their hearts in places like Standing Rock. Where are you? Come with me, come with us.”

Listen to “Roots of Rye” on iTunes and Spotify. Find the original demos on SoundCloud.