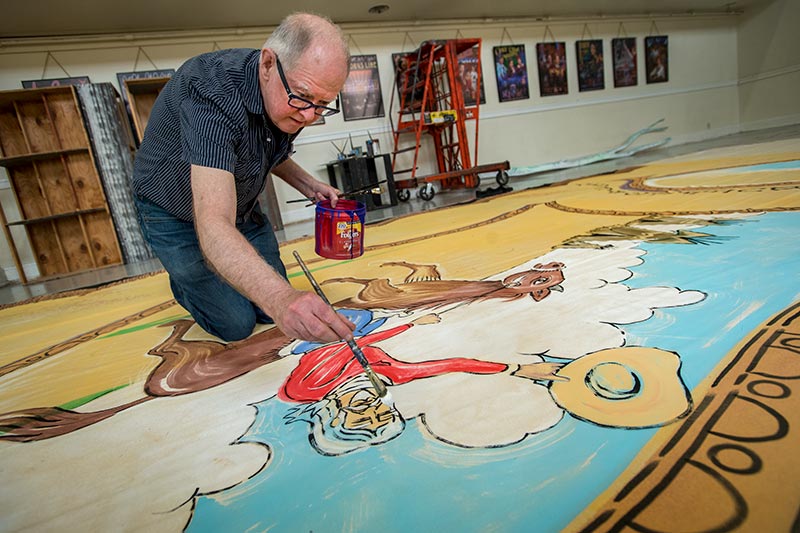 The Right Place at the Right Time: A Conversation with Set Designer Rick Paul

I first heard about Rick Paul from Kelly Anchors, who directed Bipolar Beauty. Rick Paul designed the set, which was an ornate and fantastical addition to show.

Rick Paul has been a set designer since 1951 and started working in Chicago theatres in the late ‘60s. Besides being a veteran theatre set designer and dabbling in movies, he founded the first gay theatre company, the Lionheart Gay Theatre company, that was inducted into the Chicago LGBT Hall of Fame in 1994.I spoke with Rick Paul on the phone about his career and his set design process.

Paul was introduced to theatre through his older brother who started acting in school plays. He was immediately drawn to the mysterious experience of being backstage, Paul describes the sets as a delightful escape.

“[it was]fantastical… they had blacklight,” Paul said.”One was a subterranean cave with stalagmites, the other one was a desert island, or a tropical island. When I did the play it was a barnyard, nothing imaginative.”
Paul’s love of art and difficulting remembering lines led him to start designing sets in the 4th grade.

Paul dabbled in different educational institutions, starting at Northern Illinois and transferring to Goodman Theatre when it was at the Art Institute for two years, as well as the London School of Film. Through the At the age of 22, Paul was making a living entirely from set designing. Paul met June Pyskacek, the founder Kingston Mines theatre and also started working for Stuart Gordan at the Organic Theatre. As he puts it, it was all about the right timing, as Paul started working at the start of the Chicago theatre boom.

“After the beginning of the Off-Loop theatre movement, when I started there were 5 theaters and then after a few years there were 40, and now there are over 100 companies,” Paul said.

Although Paul designed sets all over the world, he kept getting pulled back to Chicago.

“Whenever work would dry up in another city I would just come back to Chicago and find a job the next day,” Paul said. “And then eventually I just felt like I should just be here.”

Paul describes the progression of his career as being at the “right place and right time.”

“And even the times where I was ready to retire and quit,” Paul said. “someone would say, ‘Oh well there’s a little theatre up in Glencoe and they don’t have a designer’ and it turned out to be Writers Theatre which is now one of the best theaters in America. I just kept going where people wanted me to and they turned out to be these big things.”

One of Paul’s notable works was at Ivanhoe, where he worked for George Keithly.

“[Keithly] didn’t know me from Adam but he just took a chance,” Paul said. “He was a good friend of Tennessee Williams so I got to work with Williams on a play called Outcry; it got worldwide attention. It was such a great experience. I think I was 22 then. He was the most famous playwright from the generation before mine. With June Pyskacek, she was working with Sam Shepherd and Maria Irene Ernez, and at the organic that’s where David Mamet started. I had the best of the 1940’s and 50’s and the 60’s and 70’s and 80’s. I just happened to be at the right place at the right time.”

Four of his designs from 1969 to 1977 are archived at the Chicago Public Library, which I was able to view. His work is ornate and vivid; the set for American Hurrah has a brilliantly colorful leafy garden with purple figurines with old-fashioned furniture and a grandfather clock on the periphery (unfortunately, the Chicago Public Library does not allow the images to be published). Paul starts his process by reading the script, meeting the director, and if it’s a living playwright, meeting with the playwright.,

“You get their input and then you try and get a hook, you try and find something visual, assuming it isn’t a box set, realistic apartment or house where you just kinda figure out where the characters would be — what their income level is. When you’re doing a musical it can be much more fantastic,” Paul said.

This has to be combined with the practical constraints of the physical limitations and quirks of the theatre as well as the budget of the play. Paul usually builds a cardboard set to scale after his initial sketches.

Set designing is always about being on the same page with the directors, actors, and the whole crew, including the lighting and costume designers.. One of his favorite directors to work with was Sturat Gordan, who had a very

“The shows were organic because they were never completed until closing night. Two weeks before the show ended, he would come up with a new scene to do, and you’re thinking, there’s no budget, and i don’t have any helpers,” Paul said. “And he’ll say, “well I’ll help you’. And he would. He would get his hands dirty and get on the cardboard. And you’d go, okay it’s his theatre, it’s his show, you can’t say no. He’s willing to help and figure out how to do it. Two weeks before the end of the show, something radical might change, so you always felt like you were always contributing to the show.”

In 1979, Paul started the Lionheart Gay Theatre Company as a response to the generic gay plays that he was seeing in commercial theatre.
“I started it because I was bored with commercial theatre,” Paul said. “And the gay plays, the gay and lesbian plays at the time were pretty conventional and we wanted to do wild stuff and we knew that we would end when the commercial theaters started doing gay plays on a scheduled time. So we kinda felt we were pioneers.”

Lionheart would stage their productions at various theatres that owed Paul money, so that they didn’t have to pay rent. The proceeds of the play would go to various gay and lesbian organizations around Chicago.

Paul describes those plays as crazy, experimental plays that were not issue plays “not coming out plays, or lesbian child custody battle plays.” Their philosphy was, “Why can’t we just tell a good story that has gay people in it?”

One of their most popular plays was One by Jeff Hagador, which was the first play about the AIDS crisis. Although they had done two plays about the AIDS crisis before, it had not yet been given an official name. After debuting at the Organic Theatre, they took it the World’s Fair in New Orleans and staged it at a festival in Edinburgh.The play got national attention: it was featured in Time Magazine, reviewed by Richard Christiansen, and featured on the BBC.

Paul continues to get pulled into various projects.

“Every time I think I’ll retire, someone else offers another play for me to work on,” Paul said.

Paul’s upcoming projects include an upcoming show at the Rhinofest as well as shooting a movie.

Rick Paul’s work can be seen in Chicago theatre. Rick Paul has no social media presence.