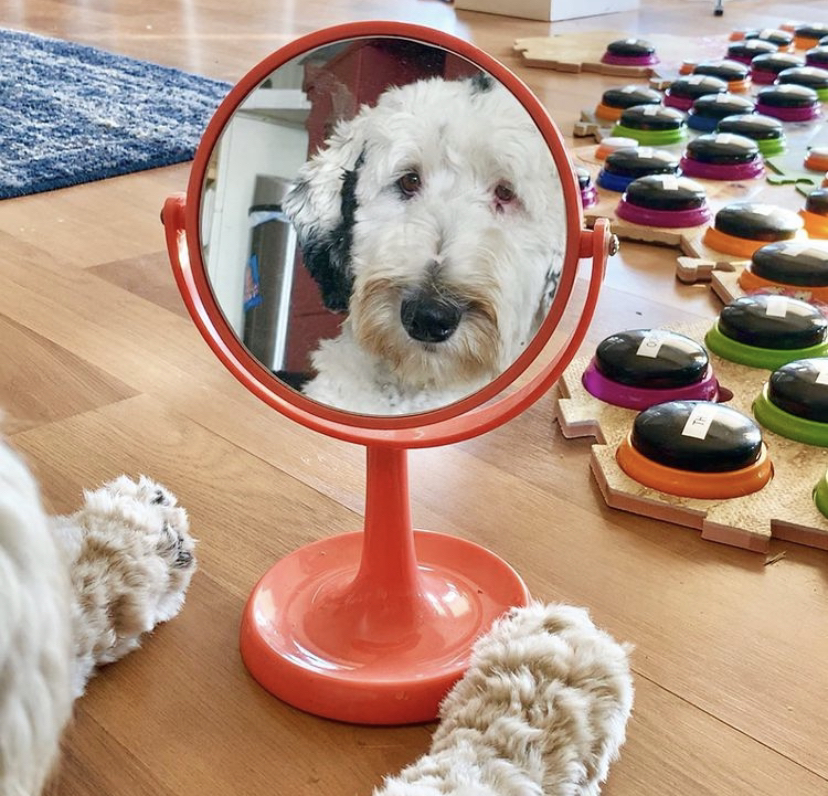 Does This Dog Know She’s a Dog?

There’s a dog on TikTok that can speak to its owner through record buttons that people are starting to think is having an existential crisis. The Dog, named Bunny, (@what_about_bunny on TikTok) spends most days like every other dog: walks on the beach, eating kibble and treats, and pooping on the ground.

“Each word corresponds with a specific word or phrase that she can use independently or in combination with other words to achieve a certain goal,” Bunny’s owner Alexis Devine said in an interview with Mashable. “I started TikTok on a while, it’s been a month now and two million followers.”

Devine mentions that Bunny is not the first dog to use this method to test communication. Devine was originally inspired by Christina Hunger and her dog Stella (@hunger4words on Insta).

The interaction began innocuous enough, Bunny quickly realized that she could get more playtime by pressing the right button. Over time, Bunny even learned combining words like “come” and “later” to communicate complex things like order of events and time itself.

“Did you say ‘Yesterday Soon?’” Devine said in a Tiktok in conversation with Bunny. “Tomorrow soon, yesterday before tomorrow. Watching her try to sort ot these insane concepts is incredible.”

With (at time of recording) 5.2 million followers, Bunny has quickly become larger on the platform than even the huge account she’s the focus of. Many comment threads, even ones she’s not relevant to, have people using the dog emoji to replicate the act of bunny pressing buttons between words.

The most common joke among these comments? That Bunny is starting to become self-aware. Devine even has started making TikToks that specifically address this, usually involving Bunny interacting with a mirror..

“Did you just say ‘Who This’ and then look in the mirror?” Devine said in a Tiktok in response to bunny while pointing in the mirror. “Who This? That’s Bunny.”

It’s become common practice on the app for users to even create videos that pretend to be Bunny plotting to overtake humanity. One of the most famous combines Bunny with Brian David Gilbert from Polygon’s famous “Sonic Could Kill God” rant from his Unraveled series.

Bunny does have critics, many point out the famous Clever Hans or suggest that Devine is editing Bunny to make her seem more interesting. Devine has made it clear that neither is the case, and ultimately the point for Devine and Bunny is to build a stronger relationship, not to bring Bunny to self-awareness or to complete communicative ability.

“”I do my best to be as objective as possible and I am aware of cognitive bias and Clever Hans,” Devine said in a TikTok. “But we’ve been able to completely eliminate those risks until later in the study. There are astonishing parallels to human language development, even within her mistakes.”

“I do not selectively edit, I do not alter sound, if videos are sped up or cut it is only to make them fit TikTok’s length restrictions. The reason I started doing this to begin with was just to have the most connected relationship possible with Bunny. I have no vested interest in the results of this study. Our journey is about our relationship, not about proving a dog can talk.”