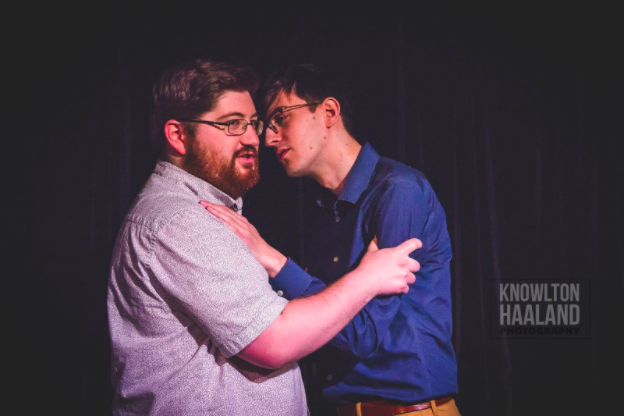 In-The-Moment Arts: An Interview with Trent Dozier and John Schnorrenberg

Pictured above: Trent Dozier and John Schnorrenberg in “The Arts”/Photo: Knowlton Haaland Photography

After their performance, I sat down with Dozier and Schnorrenberg to discuss their weekly variety show “The Arts” at CiC Theater. The duo combines their original improv act with a house improv group and solo performances of other art forms.

Trent, you are “A Thick Meat Boy.” John, you’re “The Bone Daddy.” Where do these names come from?

Thick Meat Boy: Before John and I were a duo, we were friends. It was just something I called us.

Bone Daddy: A year ago, we were in a trio with our friend Nia, and we called ourselves Yum Yum Thank You Dad. It was just something we said.

Thick Meat Boy: A lot of people wondered why the names are so sexual. What’s up with the sex names? No, that’s not what we were going for. The names are not sexual. It’s our body types. The names are weight-based.

Bone Daddy: There is a bit of onstage sexual tension. Like tonight, there was a bit tonight.

Thick Meat Boy: Yes, I would not disagree.

You both met at iO. Why are you doing improv instead of, say, writing or traditional theater acting? What’s the appeal for you?

Thick Meat Boy: Improv is where I feel most comfortable. A lot of people would feel uncomfortable doing the stuff John and I did tonight. We’re all realizing stuff in the moment, and it’s those in-the-moment discoveries that are fun. It’s a very freeing feeling to be on stage, to not know where you’re going and also nobody else knows where this is going. Everybody has this unspoken agreement that we’ll all support each other and have fun with each other.

Bone Daddy: Something Trent has said is that many of the best people he knows are improvisers. There are certain core qualities about being able to do improv well that translate to being a good person.

Tell me about this series. You’ve been doing it for a few weeks now.

Thick Meat Boy: John and I talk a lot about seeing the same stuff over and over again, so with this series we’re trying to do something different. We’re asking our friends to show off their talents outside of improv. We know so many talented people, and we can’t do improv with all of them. The main thing I want to do is to put a spotlight on people who I think are good and talented and who I personally like.

Bone Daddy: It’s exciting every week to come to the show. Yes, I get to perform with my friend Trent, but also I know I’m going to like every act because we chose people who we like and who we know are talented. We’re very personal about this. We want to get people we know and like.

Thick Meat Boy: Our hands are very much into this. We want to know everybody who’s performing. I feel more comfortable promoting a show if I’m confident in the people as people. I have no problem saying, come and see my friends perform. I’ve never seen them do this, but they’re probably good.

You’ve had musicians, poets and stand-up comedians come onto the show.

Thick Meat Boy: We had a dance/storytelling sketch this week. It’s only going to get more absurd. We have a food-themed show on Wednesday, February 21. One of our friends is going to bake a pie. One of our friends who used to work at a Budweiser brew factory is going to show us how to correctly pour a beer to get the most flavor from your beer. Also, our friend Adam is going to try to break a world’s record, which he previously held. It was stolen from him. It’s the amount of pushups you can do in 30 seconds face-first into a pan of barbecue sauce.

This is DIY theater. You’re building it, you’re collaborating with people you know and appreciate and you’re putting it out there.

Thick Meat Boy: That was one of the reasons we wanted to do this show here. We thought, based on the other acts we’re putting up, we can get an audience that doesn’t see improv often, and hopefully they’ll enjoy the acts they’re seeing, and then they’ll see the CiC house team, and when they want to see improv, this is the place they’ll think of.

Who were you working with at CiC? A lot of people have performance show ideas. Two stumbling blocks they come across are finding a venue and getting people to show up. How did you secure this venue?

Bone Daddy: I remember I saw the Sunday evening poetry slam at the Green Mill, and I came out so pumped about the way they involve the audience. I was thinking that I wish other improvisers would see this and other art forms. I was talking about this with Trent. I said, what if we had a show where we did a set and a CiC house team did a set and we brought other artists in to try to get different mediums to collide and get to know each other and have an appreciation of each other.

Thick Meat Boy: Farrell Walsh, who is a teacher here and the artistic director, had mentioned they were trying to do new things, so when John said that to me, I said I think we should look at CiC.

Bone Daddy: The timing was good for us. Farrell was just opening two nightly slots. I guess the answer to your question about securing a venue, luck is big, shopping around and also getting to know people and just being a good person. We’ve been getting to know Farrell for a year, letting him warm up to us.

Thick Meat Boy: I don’t know if Farrell will ever admit it, but we think he likes us.

Tell me more about your series, The Arts. How long is this going until?

Thick Meat Boy: Farrell never gave us an end date. He wants to give us a chance to build an audience.

Bone Daddy: Farrell is looking to increase his audience at CiC. We want our show to succeed, and I personally want more people to come to CiC and see the improv that’s here.

Thick Meat Boy: We want the vibe and the tenor of our series to be consistent, but the show you see week-to-week is completely different.

You did something interesting at tonight’s performance. You invited the audience to provide backup music.

Thick Meat Boy: Because there’s no piano player at CiC as there is at other theaters, so no underscoring, this week we had the audience underscore our set. One of the goals for our show is for at least one set to be very audience-participatory. We want to interact with people.

Bone Daddy: I’m worried because improv is sometimes becoming a disengaged experience. Oh, this is when I laugh. Oh, scene change, applause. It’s meaningless. We do it because we feel we need to do it. When people come to The Arts, I would like them to feel comfortable like they’re welcome here and they should be here, but I also want them to feel a bit uncomfortable because anything could happen and we are going to call upon them to help. Our goal is for the audience to feel they’re a part of the show.

You mentioned the Green Mill’s poetry slam. Whenever I see Marc Smith say, “I’m Marc Smith” and everybody yells, “So what?” it suddenly feels like I’m more likely to laugh because I’ve emoted. I’m a part of the show.

James Berg
James Berg (he/him/his) is a DIY Theater Correspondent with Scapi Magazine. James is also a poet with the collective Poems While You Wait and a lyricist whose songwriting has been a part of several Americana folk/rock productions including Old Shoe’s Family, named best Chicago album of the year. James teaches English classes at the City Colleges of Chicago and escapes as often as possible to write and perform in Paris, France. His fiction, nonfiction and poetry are available at Shakespeare & Company bookshop in Paris. His music and all else is online at jamesfromtheusa.com. Connect through Facebook, LinkedIn, Twitter, Soundcloud, Instagram or email.

James Berg
James Berg (he/him/his) is a DIY Theater Correspondent with Scapi Magazine. James is also a poet with the collective Poems While You Wait and a lyricist whose songwriting has been a part of several Americana folk/rock productions including Old Shoe's Family, named best Chicago album of the year. James teaches English classes at the City Colleges of Chicago and escapes as often as possible to write and perform in Paris, France. His fiction, nonfiction and poetry are available at Shakespeare & Company bookshop in Paris. His music and all else is online at jamesfromtheusa.com. Connect through Facebook, LinkedIn, Twitter, Soundcloud, Instagram or email.
More from ArtMore posts in Art »
More from TheaterMore posts in Theater »