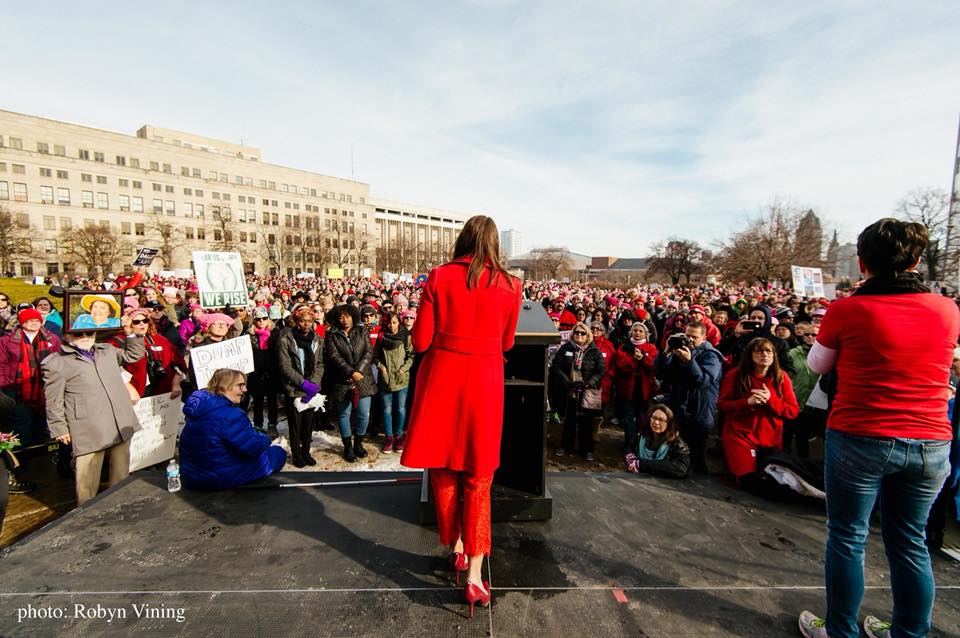 There’s No Such Thing as Reverse Racism: Intersectionality, Accessibility, and Regional Organizing at the Wisconsin Women’s March

Scapi Magazine had the opportunity this year to sit down with Sarah Pearson and Samantha Hana Hentzen, organizers of the Wisconsin Women’s March, direct from the comfort of Maureen’s mother’s cozy living room.

Maureen begins by asking the pair: “Since last year’s women’s March, what has happened in your lives that led you to organize the Wisconsin Women’s March?”

“At the women’s march in Madison, I remember looking around and being really inspired by how many people were there, but being really taken aback by just how white it was,” Samantha Hana Hentzen said. “It was like, everyone was like a white woman. I really didn’t see any people of color. I saw one another hijabi, and we kind of like, nodded at each other.”

Hana Hentzen notes the blatant lack of accessibility and lack of inclusivity for trans and nonbinary individuals at the march as well. The troubling political climate also pushed her to start getting more involved in different ways,

“I wanted to get involved in the political climate more, and in advocacy more, just because it really wasn’t an option not to,” Hana Hentzen said. “After the election, and after Trump’s campaign really, there was all this anti-LGBTQ, anti-muslim, anti-immigrant, anti-black rhetoric going around. It affected me, it affected my friends, my community, my family… I didn’t have the privilege to not get involved”

Hana Hentzen highlights a personal story: “There was a woman who goes to the same mosque as I, and she was attacked while walking home from prayer at six in the morning. She was in the hospital for a few days, and so now my mom won’t let me go to the mosque after a certain time at night. It was one of those things where it affected me directly…”

She started getting involved with the state health department and loveisrespect.org. She met Sarah Pearson at the convention and decided to start a Wisconsin chapter of the Women’s March.

“Women’s March, it is an intersectional movement. And that’s something that separates us from every other women’s rights movement in history” Hana Hentzen said.

Maureen busts out in a: “Retweet!”

To better address the concerns of affected communities, Pearson and Hana Hentzen made it a point to reach out to the marginalized and ask.

“We needed this year, I think, to reach out to the most marginalized communities and say, ‘What kind of event do you want to see? What for you would make you want to go this year, or feel comfortable going this year?… Kind of across the board people said: ‘Women of color have been doing the work in Milwaukee,” Pearson said. “These are the organizations that have no choice but to go out and do this work, because these issues are constant for these communities.’ So they were like, “Honestly, recognize the work that we’ve been doing, and do that by giving us the microphone and giving us your money.”

Even though the two are striving for a more inclusive and accessible Women’s March, they still seem to get pushback from certain members of the feminist community, majoritively white women.

Hana Hentzen and Pearson can’t help but wish that the women claiming reverse racism exists would show up for the important issues.

The two protested and got arrested together at the tax protest in Washington, D.C.

“That was the most empowering thing I’ve ever done really,” Hana Hentzen said. It was an incredible experience. We were arrested in the Senate building.”

After her arrest, the process was particularly long, because they did not know how to take her mugshot with her headscarf on.

During the voting process at the Senate, individuals affected by the tax bill began standing up in protest to share their personal stories. One particular individual, a man fighting cancer, stood up and begged the Senate to do something only to be met with laughter.

“For me, watching that, I mean it was obscene, because the republican members of the Senate who were watching this happen were laughing at him,” Pearson said. “Literally looking up at the Senate gallery, watching him get carried away, and they were pointing and laughing.”

“One of the things that is really important to us, that we wanted to highlight, and what we’re going to close our rally with is we’re having Colleen Kennedy, who is an indigenous rights activist and a water protector, talk about Native rights issues,” Pearson said. “And I think that’s so important, because it’s often an issue that gets really overlooked.”

And another thing: it’s time to talk about the problematic pussy hats from last year’s Women’s March.

“Not all women have pussies,” Pearson said. “Not all people with pussies are women. And not all pussies are pink.”

In lieu of pink pussy hats, attendees of the Wisconsin Women’s March are encouraged to wear red in support of murdered and missing indigenous women, an issue the organizers hope to draw more attention to.

As the conversation winds down, Pearson says,

“We’ll take this energy into the night, all night, as we continue to plan this march.”

And from Hana Hentzen, one more thing:

“Take that word, Reverse Racism, and drown it.”