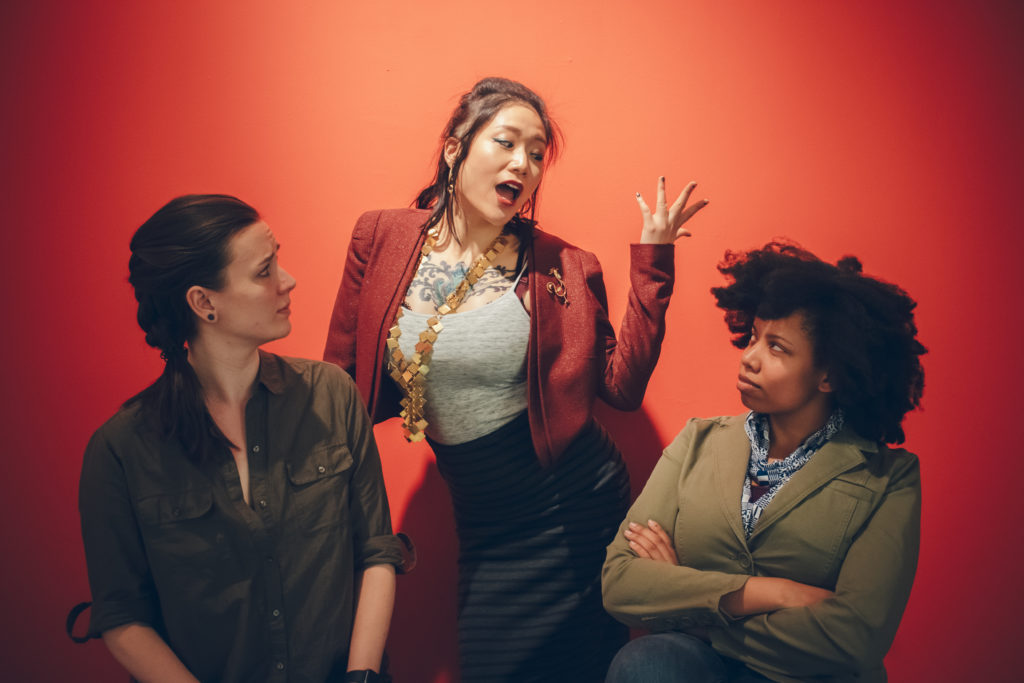 Performing into Believing: Playwright Kevin Sparrow Breaks Down the Process of Devising Cornerstone

Stepping into the mall at 900 North Michigan Avenue is a very specific experience. It is self-depicted as a “large, upscale shopping mall” and specifically has a layout designed antithetical to the design of the Water Tower Place across the street.

The deliberate design of the architects to place the anchor of the mall at the rear end of the space draws shoppers through the mall. In addition, the escalators are placed parallel across from each other, rather than in zig-zags like at the Water Tower Place, which allows customers to pass by more shops.

The 70 plus retailers in particular offer “elegant facilities” and include stores like Gucci, MaxMara, Montblanc, J.Crew and Michael Kors, as well as small boutique collections. 900 also offers a full-service concierge, which includes “many of the same services as a luxury hotel.”

On the third floor of 900, ArtSpace 8 Gallery is located on the far most west end, surrounded by stores Fooda, My Sister’s Circus, North Shore Exchange, Scandia Down and The Goldsmith Ltd. It is a 14,000 square foot gallery space that features paintings, prints, sculpture and works on paper from local and international artists. A spiral staircase takes one down to Artspace 8’s lower level, where Nothing Without A Company’s Cornerstone has taken a temporary residence.

In the red room

The right corner of the lower level features a pristinely red room, a focal point of the space.

“There were many aesthetic choices we made regarding the site specific space,” Literary Manager of Nothing Without A Company and writer of Cornerstone Kevin Sparrow said. “Color was a choice and design was a choice, because it matched the red room. We designed the rest of our branding, the sign, logos and audience participation sheets with that in mind.”

Sparrow walked to the opposite side of space, settling down on a coach that stood before locked, glass doors. A sign was hung on them that alerted the public that an alarm would go off if someone tried to exit through them.

“That was already a part of the space, but it contributes to the control that the space gives,” Sparrow said. “You can’t leave in the middle of it.”

Sparrow intentionally developed and planned out overlapping scenes to happen throughout the various gallery rooms.

“I had a desire to have the audience travel, for there to be things happening all around,” Sparrow said.

Mapping out and scripting out the dialogue within the script was a difficult and time consuming process for Sparrow, but using content design to communicate to other people was particularly fun for their “poet brain.”

While Sparrow described the space and their progress with it, Projection Designer Sarah Collonge worked with red projections that sprawled and flickered across the gallery. They cast a crimson light on paintings, signs and fixtures had been present at Artspace 8 long before Cornerstone arrived; and yet, they seemed to work with the immersive experience perfectly.

“There are a lot of details I didn’t initially realize [when coming into the space],” Sparrow said. “They’re not necessarily within the script, but they do inform the world that the script takes place in.”

The beginnings of charisma

Sparrow had been working on this piece with Jake Freund, who conceived the idea for the piece, since May/April 2016. Since then, Sparrow and Nothing Without A Company worked on the project’s themes, performed research on architecture and cults/new American religions, developed materials and teachings behind Cornerstone and hosted multiple workshops.

Sparrow focused their research on architecture because of the planning and blueprints required. They researched different architects and movements throughout history, fixating on the modernist work by Le Corbusier and how his ideas/philosophies on segmentation were so easily accepted by his peers.

This fed into the necessary research Sparrow did on cults and New American religions, including the novel “Prophetic Charisma: The Psychology of Revolutionary Religious Personalities” by Len Oakes.

“I think we can talk about language as a neutral sphere, and words like ‘cult,’ they can have good and bad things within it,” Sparrow said. “It’s interesting that there is a difference between the different types of leaders. Not every leader ends up being dark, but it is always about power. There are very weird and different things happening in each cult, and power always ends up being distributed differently. I wondered how those leaders had that kind of charisma and where people came into that.”

Workshop into a world

In the first workshop, Sparrow recorded and transcribed the videos of the workshop performers, who were asked to improvise their own Cornerstone lectures based on the initial material about the organization that they were given.

“I was looking for language and cadence there, not just the content,” Sparrow said. “I layered things into the ways that actors said them, like using my research and putting it into the speaking mode of the actors.”

Sparrow wanted to create three, distinct characters to act as the Consideration Managers, who host the Cornerstone lectures and help attendees design the next phase of their lives.

“We needed to look for more things to string together,” Sparrow said. “We had to think about how we could actually make sense out of the material and work out of the concepts.”

Once Sparrow and their team began to work within Artspace 8, they began to devise with the cast and write the script for Cornerstone. Sparrow noted that many devising processes, especially those that involve a lot of movement work, are more fluid; those scripts often stay within a skeleton. Cornerstone’s specific focus on language gave it the necessity to have all the components of the world go through one brain: the playwright.

“This is a very language-heavy play; partially because I’m a language person and partially because the environment we’ve created is about using language to code certain messages,” Sparrow said. “You immerse yourself in language so much that you’re not quite certain of what’s reality and what’s not. You get so many words that sound like they can be meaningful.”

Sparrow played with that power of language in the context of American exceptionalism.

“Focus on yourself, build yourself up and don’t worry about other people and what’s happening with them,” Sparrow iterated messages behind Cornerstone. “It’s about you. You can’t worry about your altruistic purposes if you haven’t satisfied your own needs first.”

The script was initially written to be entirely neutral in terms of character casting. The beginning of the script also denotes that the play must be cast diversely.

“It’s a blank slate at first,” Sparrow said. “I do try to be mindful of writing so there can be dynamic, and [director] Rose [Freeman] does a great job at pulling threads out based on who is cast in that role, power dynamics and what the script is made for.”

Sparrow specifically took into account that when these roles are cast, the play is open to the change that comes with power dynamics between people.

“If something needs to change, it can,” Sparrow said. “I try to keep the language open and observant so we are able to shift different actors into those roles.”

Cornerstone sessions run Thursdays through Saturdays at 7 PM and on Sundays at 6 PM through Sunday April 29 at Artspace 8 Gallery at 900 North Michigan Avenue. Buy tickets and get more information at nothingwithoutacompany.org/cornerstone.