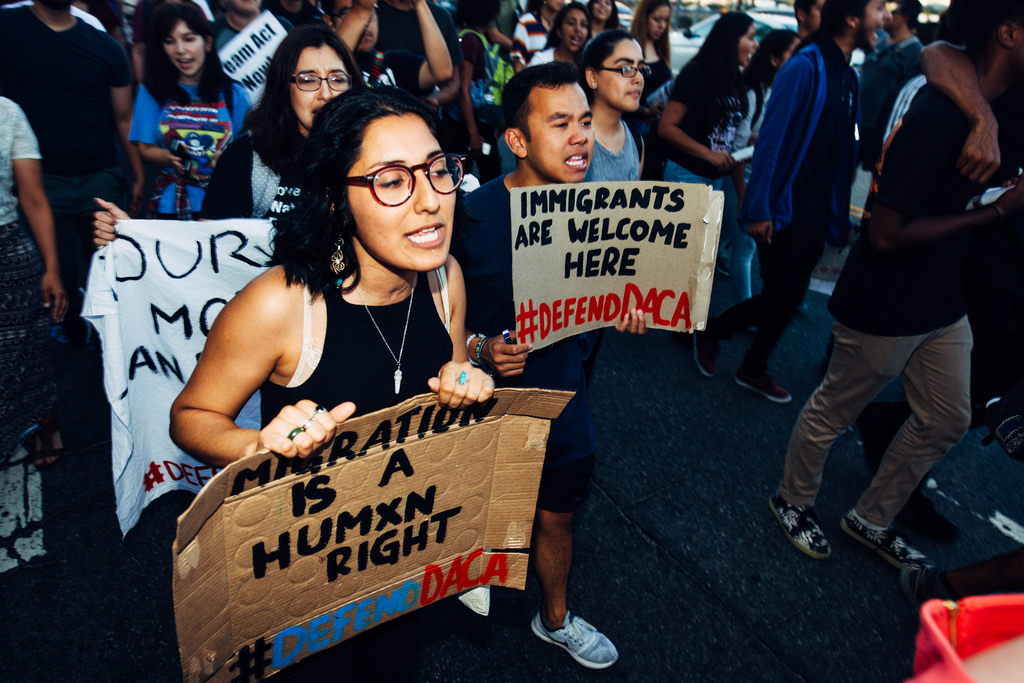 Community Organizing in Support of Immigrants: A Conversation with Laura Mendoza and Denise Yvette Serna

Photo by Molly Adams at the Defend DACA March in LA

On March 29, 2018 Daniel and Maureen sat down with Laura Mendoza, from the Resurrection Project, and Denise Yvette Serna, who hosted a reading of the play “Just Like Us” by Karen Zacarias where three community organizations, including the Resurrection Project alongside the Pilsen Alliance and Mujeres Latinas en Accion, would be at attendance. 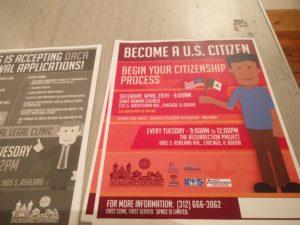 The Resurrection Project is a community organization that was founded twenty-eight years ago by Little Village, mostly Mexican, parishioners of three churches in order to provide their community with resources the city was not allocating to the area. This organization now mostly works around Pilsen, Little Village, and Back of the Yards communities. One of the Resurrection Project’s main focuses is currently immigration.

The organization provides legal services for immigrants, assists with DACA applications and sponsoring, provides housing assistance and owns housing it is able to rent out to community members, it informs community members about policies, and trains individuals in how to interact with police and immigration officials. In 2017, the Resurrection Project’s services reached about twenty thousand people.

“At the end of the day we want to create healthy communities,” Mendoza said. “That starts with not only the organization owning the buildings and being able to rent out but also making sure that our community members are able to purchase homes, are financially stable to do that. That they are going to school and that they are getting their university degrees and things like that.” 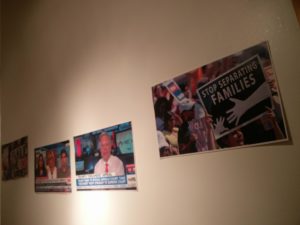 Laura is no stranger to the immigrant experience. At seven years old, she immigrated from Mexico to Chicago. She is a DACA recipient and she, like many other DACA recipients, is doing meaningful work for her community. For those who do not know, the Deferred Action for Childhood Arrivals (DACA) was an executive order signed by President Obama in 2012 stating that individuals who arrived before age 16 would be protected from deportation and provided with a work permit to legally work in the U.S. DACA has to be renewed every two years and costs $495 to apply.

Laura graduated from university with a degree in social work. Post graduation she worked with refugees for several years. The Trump presidency helped her reflect on what she wanted to do because, as a DACA recipient, she felt powerless when faced with the uncertainty of the program. She had previously volunteered for the Resurrection Project and was eager to be employed by the organization when the opportunity arose.

“I wanted to protect not only myself, but also my community members,” Mendoza said.

Unlike Laura, Denise was born in the United States. Like Laura, she is passionate about assisting latinx people regardless of their paperwork status. Denise grew up in the southern part of Texas, near the Mexican border. In her area there were many undocumented people.

“When you’re growing up and you’re playing with people you’re not thinking about your paperwork,” Serna said. “You’re thinking about the people that you’re growing up with, the people that you’re falling in love with and who you’re going on adventures with. And as I’ve grown up and developed my artistic practice I have tried to tell stories about latinx women.” 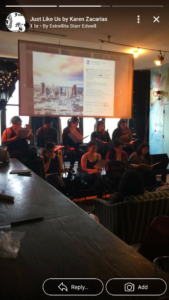 Her experiences growing up surrounded by both documented and undocumented latinx people led her to request to do a reading of the play “Just Like Us.” The play is based on a book about fur Mexican girls coming of age in Denver. Two of the girls are documented and two are undocumented. The story touches on the opportunities each girl is allowed based on their immigration status.

“Just us speaking and moving through this world and being competent and being successful is a political act,” Serna said.

The past few years have shown an increase in representation of black and brown people in art and media. Many individuals are using art to tell their own stories and to speak out about what is currently happening in the United States.

“It’s not enough to be angry,” Serna said. “You have to be active.”

Along these lines, Laura states that people can actively support the Resurrection project by donating and volunteering. Immigration lawyers can be very expensive, a DACA application costs $495. People can choose to sponsor a DACA recipient.

Laura touches on the importance of voting. DACA recipients cannot vote and undocumented immigrants cannot vote. It is important that those who care about these populations vote for politicians that share their values. Laura emphasizes,

Click here to listen to the full interview with Laura Mendoza and Denise Yvette Serna. To learn more about the Resurrection Project visit their website here or call their immigration department hotline, or pass this number to someone who might need immigration assistance, 312-666-3062. Also visit Mujeres Latinas en Accion here, you can call their rape line: 888-293-2080, and their domestic abuse line  at 312- 738-5358. Lastly, to learn more about the Pilsen Alliance visit their website here.