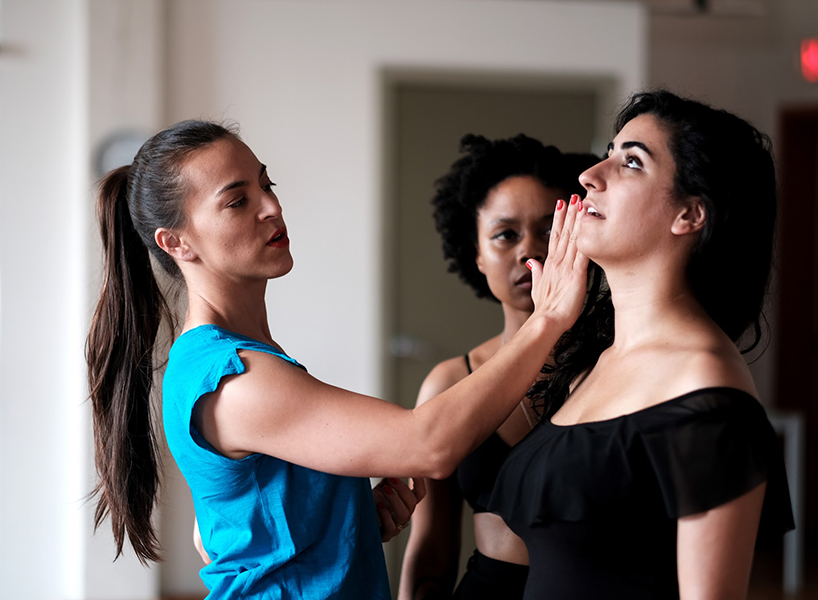 My name is Nick. My pronouns are they/them.

I’ve seen and experienced sexualized violence in my workplaces. I’ve been asked to compromise my bodily autonomy in the theater.

I’ve been asked to be an actor who always says: “Yes!”

I did not always understand the severity of what I experienced. I know that I am not alone.  I’m calling for this to end.

As the national conversation regarding sexualized violence gains more recognition, Chicago’s theater community has had to face some of our most difficult and uncomfortable truths:

With all this in mind, the question remains: How do we move forward?

The harsh reality is that this is not a new question. In the vast and rich history of theater, we have yet to make significant progress in creating and maintaining practices which advocate for the safety and well-being of performers. Therefore, we must continue to innovate and find new solutions. But how do we change the face of our culture?

The beginning of a conversation

The concepts and practices related to intimacy direction and consent culture have been employed sporadically throughout the history of theater to varying degrees. Until recently, there has been no defined process or pedagogy specifically addressing stage intimacy.

Though there is a lack of established practices and pedagogies related to the work, it is widely accepted that intimacy direction is a practice pioneered by Tonia Sina during her graduate studies at Virginia Commonwealth University (VCU). While a masters student at VCU, Sina was studying theater pedagogy and performance with an emphasis in movement, so she incorporated fight direction and choreography into her coursework. Sina had a moment of clarity when she realized how easily concepts from stage violence translated to choreographing intimate and sexualized moments on stage.

In its most rudimentary application, the principles of intimacy direction call for trained professionals to oversee staged intimacy—similar to how a fight director operates. The role of the aforementioned professional can be referred to as an Intimacy Director, Intimacy Designer, Choreographer, among others.

Feeling that she had discovered a new approach to an old problem, Sina eventually published and defended her thesis “Intimate Encounters; Stage Intimacy and Sensuality.” In an evaluation of the 2006 publication, the genesis of intimacy direction is clear. Sina’s thesis laid the foundation on which intimacy direction was then developed. Furthermore, the elementary concepts Sina introduced provided the blueprints for creating practices in intimacy direction.

“If you don’t get beyond the homework, the outcome will become academic,” Anne Bogart once said. “Academic art simply validates the research. It does not challenge it.”

In addition to Sina, there have been a number of other theater artists and academics who have participated in the advocation and implementation of intimacy direction. In recent years, organizations such as Theatrical Intimacy Education (TIE) and Theatrical Intimacy UK have come to fruition.

As the conversation has evolved, many advocates are now using “consent culture” as a more inclusive term to describe the work of all intimacy professionals.

Though linguistically nuanced, it is important to note that consent culture is a much broader term which includes intimacy direction as one of the many suggested practices. Advocates for this work have noted that consent culture broadens the scope and responsibility of theater professionals; it charges all members of any production or company to participate in the betterment of the work environment.

It is the role of an intimacy professional, be it an intimacy director or any other title, to advocate for practices that forward the agenda of creating a safe, professional working environment for all people in the room.

Intimacy is not always sexual, or even sensual.

Though intimacy direction is related to the #MeToo movement, intimacy occurs in ways which are not always sexualized. Actors are charged with emotional vulnerability, so intimacy can be triggering and produce unwanted and unhealthy outcomes. Intimacy in all forms requires a great deal of aftercare.

It is an established psychological concept that the human body is unable to differentiate between different stressors. Any perceived threat produces the same physiological response– fight flight or freeze.  In my studies, a professor once reconceptualized this in its relevance to the actor on a stage. He argued that since the body has only one reaction to real or perceived dangerous situations, we must, therefore, invest in developing safe space to explore these sensations without causing damage to the actors well being.

This means that all stressors, particularly those which put an individual’s autonomy in question, require a great deal of care. Intimacy practices often focus on sexual and sensual moments but are not restricted to such situations. An intimacy professional may set guidelines and practices to permit a safe working environment for an actor to explore their most intimate and emotionally vulnerable selves.

The power dynamic in the performing industry does not serve the actor.

It is a difficult world for an actor. We are constantly fighting to find work. When we do find the work, there still is an expectation that the actor is there to “serve” the director’s vision; that their employment is contingent on serving someone above them.

Be it within their assigned responsibilities, or within in the culture and process of the show, what happens when an actor is not comfortable with any part of the process? An actor expressing dissent can easily be labeled as “difficult” or face the real potential of being blacklisted by powerful industry players.

The unfortunate truth is that there is already enough at stake for actors. Due to perceived and potential professional repercussions, many actors may elect to remain silent and not advocate for their own comfort or safety.  An intimacy professional in the room may be able to set guidelines and practices to safeguard an actor in this situation.

Specific and non-negotiable choreography assures safety; anything else is harassment.

Chicago loves improv! The problem therein lies that intimacy cannot and should not ever be left to improvisation.

Improvising intimate moments creates potentially dangerous and triggering moments on the stage, where an actor should never have to worry about their well-being.

It is not “bold” for an actor to offer touch or intimacy that has not been previously agreed upon. It is harassment. In the scope of intimacy work, accountability must be enforced when this occurs. While it may be an honest and sincere misunderstanding of the physical relationship and agreed-upon boundaries, it still undermines the integrity of the work. We need to be better.

How do we say “no” in an industry built on saying “yes?”

Acting is weird. Actors are asked to believably portray deep and profound love stories with a total stranger. In preparation, an actor may play complete mental gymnastics to prepare a role. Therein lies a pitfall—the showmance! In the theater, we are working professionals. You are not actually in love—usually.

Many intimacy practitioners work to provide and develop rituals that assist in the closure of our work, serving as a reminder that being committed to the art form can inevitably blur the lines between professional and personal relationships.

Typically, I disagree with the sentiment that “less is more.” However, with staged and theatrical intimacy, less, in fact, is more. Theater practitioners frequently lack the ability to find the root of the story and often focus on the sexiness of the moment.

Through tools like breath and sensuality, an intimacy professional often has the advanced skills and aesthetics to create a dynamic story without being gratuitous.

This doesn’t change our art form; it just holds us accountable.

As a new form of theater practice, intimacy advocacy has been met with resistance. Critics fear that intimacy direction will undermine the work of established methodologies.

Including considerations for safe and consensual intimacy does not ask any teacher to discard their old ways, but rather advocates for performance professionals to improve the way in which we treat each other in the room and on the stage. The consent culture movement is interested in asking how the principles of consent and respect can translate with more clarity to the different pedagogies used in studio acting.

We are progressing. We are doing better.

We have so much work left to do.

Advocating for consent culture in our theater may not solve all of the issues at hand, but it does offer an impactful approach to creating a safer and more inclusive theater. This work is necessary and it must be done now.

Stay tuned for the next installment in the series, entitled “Considerations, Criticisms, and the State of Our Chicago.”