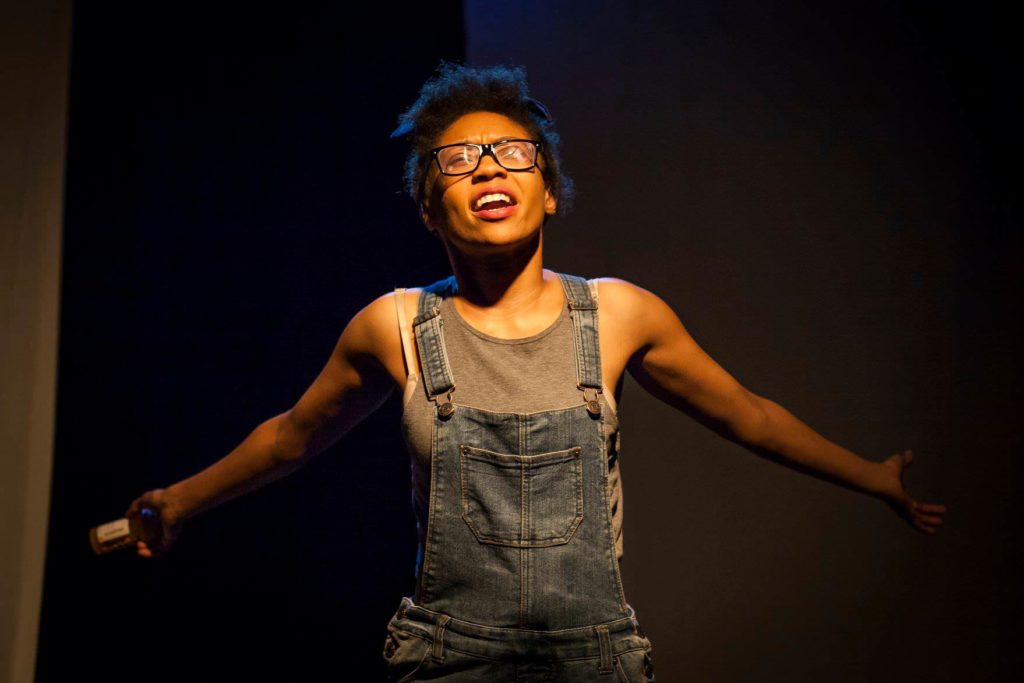 A Chicago Purgatory: Death & Pretzels and Madison Smith’s Production of The Book of Maggie

If you live in Chicago, you might seldom find yourself pondering: why? Why do you live in Chicago? And that begs the question: have you always lived in Chicago or did you move here? Is it helping you with the plan that you set out for yourself, or is it just a factor in your life? Do you like living here, or do you feel stuck in this city like you can’t get out? Is that feeling somehow part of your plan, too?

Whether you don’t think about these things a lot or it’s the only thing you can think about, The Book of Maggie by Brendan Bourque-Sheil, currently being staged by Death & Pretzels, delves deeply and comedically into the existential idea of where we are and whose plan we are taking part in.

Biblical figures, Judas and Pontius Pilate, are sitting in hell for two thousand years, bored and antsy.  They are frustrated, angry, and looking for a way out. “At the beginning of the show, they’re granted an opportunity to move up… There are two, mortal women experiencing a near-death crisis. It’s the religious version of the scared-straight program. Judas is with Maggie and Pilate is with Joan;  they’re both putting forth this effort to save these women, initially so they can save themselves. But by saving these women, they’ll literally be saving the fate of humanity,” Director of The Book of Maggie Madison Smith said.

Judas is historically vilified in telling the story of Jesus’ crucifixion. He is often depicted as the greedy mastermind who sold out his friend for thirty silver pieces. The Book of Maggie calls to attention that the tale of Jesus foretold that he was destined to die for humanity’s sins. That logic entails that someone needed to turn Jesus in order for him to fulfill his destiny. That person would be a part of “God’s plan;” that person was Judas.

“Christianity is the only group that considers that Judas must be in hell,” Smith said. “Everyone else thinks that Judas is realistically in heaven if he was stuck fulfilling a role he was destined to play.”

But in The Book of Maggie, Judas can viscerally feel the hell he is in. That hell, of course, is staged and set in the Nox Arca Theatre in Ravenswood. Death & Pretzels has utilized the resources available to them within the black box theater space by adopting DIY, collaborative and experimental practices.

“This is the first show we did without our set designer so that radically altered the way that we could look at the show,” Smith said. “A lot of that came down to sound helping us and the way that the room is lit.”

Death & Pretzels shares this space with two other theater companies, A Dead Whale Productions and Reutan Collective; each company has helped the other transform their space and elevated the work.

“This idea of co-op theater, doing things for the greater good for all three of our theater companies has been great,” Smith said. “It’s been a crazy year.”

The collective collaboration between the three companies parallels with how The Book of Maggie portrays Judas’ journey out of hell. He works with Pontius Pilate, Maggie and Joan to uncover who is actually behind the redemption plan. They try to investigate God but are stopped at the gate of heaven at every turn by Saint Peter.

But if Peter denied Christ, how is he any better than Judas?  Perhaps they are equal and they are in a much more similar situation than they realize.

In a secular city like Chicago, how does a religious play fit in? Death & Pretzels is working to make a theater community that makes their environment creative and fun at the Nox Arca Theatre. Whether it is part of the company’s plan or not, it is a path that they are winding down. That community helps them navigate the future which is always full of the unknown.

No matter what your plan is for residence in Chicago, wrong turns are bound to occur, but how you choose to react to those turns is ultimately up to you. Smith goes even further and says,

“There’s a lot of shitty stuff happening in the world, there has been and there always will be, but something that we need to remember is that every single one of us is going to die,” Smith said. “No matter who we are or what we believe or what is happening around us at this time, we are all born, we will all live, and we will all die. No matter what. So if anything, that should kind of draw us together in that experience. How can we use what is universal to us to help us understand each other better?”

The Book of Maggie is running every Thursday, Friday and Saturday through June 16 at the Nox Arca Theatre at 4001 North Ravenswood. More information can be found at deathandpretzels.com/current-production or through Facebook at facebook.com/events/351822991988093/