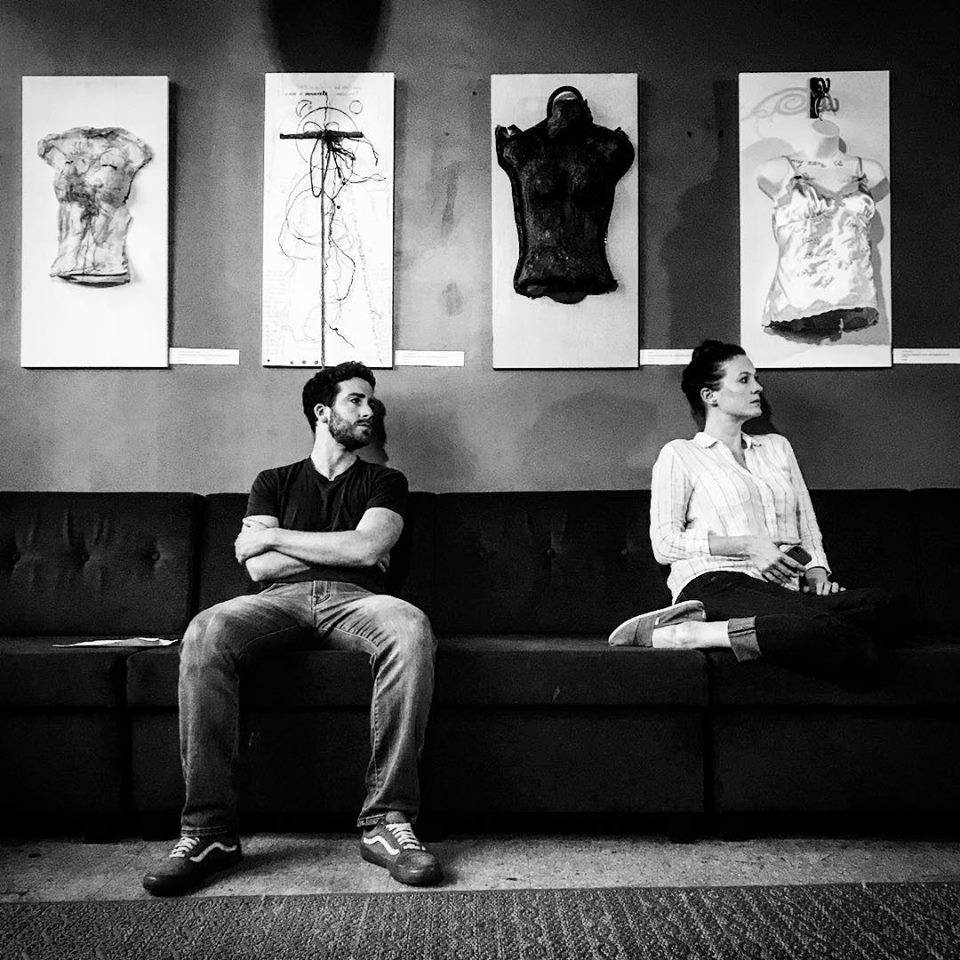 And This Distilling Liquor Drink Thou Off: An Expression On Romeo And Juliet

Pictured above: (Left to right) Mike Hamilton and Amanda Drinkall in Romeo And Juliet/Photo: Back Room Shakespeare Project

Editor’s Note: This is an expression by Zach Barr in response to Back Room Shakespeare Project’s Romeo And Juliet, in the form of a short imagined monologue; it is followed by information about the work.

Do you want to start a tab for the evening?

BARTENDER walks back to the register. There’s a peal of laughter from the crowd.

Oh, the banquet scene is starting. Always a crowd pleaser. Though, you know, it’s the hardest one to deliver food during. Oh, they can talk all they want about how anyone can cross the stage at any time during the performance. It’s relaxed, it’s casual. But you know they’re counting on at least some people choosing to sit still. But we don’t have that luxury – y’all need your food! So here I am, traipsing about in the middle of Capulet’s banquet hall, trying to find the one audience member holding the plastic number 49 in the crowd, and on top of that, I have to make sure I don’t run directly into Juliet!

BARTENDER looks out at the crowd – gathered around an empty space in the center of the Radler. A collection of motley actor-types are dancing around in street clothes and silly hats.

Not that it’s hard to tell which one is Juliet, mind. I mean, take the other characters: Montague is basically just wearing what a middle-school dad would wear to the baseball games he doesn’t coach, Mercutio looks like half the millenials in a Boystown Winter, Romeo is basically just wearing “clothes” – like, if you Google-searched for “person wearing clothes,” you’d find something like that. It’s basic.

Now Juliet – look over there. The moustache is a dead giveaway, of course. But that wig. Talk about a statement.  It’s also like ninety degrees out right now, so of course she’s the only one wearing all-black. Gotta get that goth look, though ––

No, I’ve got no idea why they did that. Probably just casting the best actors for each role. This seems like the kind of group who’d bite the bullet on that. Besides, Amanda Drinkall as Romeo? Who on earth wouldn’t want to see that? Owais Ahmed as Juliet – Skyler Schrempp as Capulet? These are ideal pairings. Whoever cast this – actually, how do they do casting when there’s no director? Do they just ––

BARTENDER continues to watch, leaning against the bar. Hearing another voice to the side, they glance up and walk to the end of the bar.

Retrofit? You got it. Want the can or in a glass?

BARTENDER starts to walk back to the register, but stops. They watch the show. Drinkall is seducing Ahmed in the center of the space. The two kiss by the book.

BARTENDER rings up the order and brings the drink over to the customer.

Here you are. Thank you, thank you.

No, at the show, I’d know if you’d been to the bar before.

Yeah, I suppose if you live North of the Loop it’s a ways out for you. But you know – gotta bring art to the people, you know? That’s like the whole thing. “Art out of the theatres, art in the streets, art for the people!”

BARTENDER watches the show again. Benvolio (Mike Hamilton) and Mercutio (Mary Williamson) are weaving in and out of the crowd, in search of Romeo – who hides by the front door.

(whispers) He’s over there!

They can’t hear me.

Benvolio and Mercutio disappear, as Romeo climbs atop the half-wall to spy at Juliet. Romeo turns to inform the people to his right and left about how Juliet is the sun, before Juliet sighs and forces Romeo to hide again under the table. As Juliet’s monologue continues, Romeo makes his way through the crowd, stepping onto the tables, asking audience members to move their drinks out of the way ––

Is this really how the Elizabethians performed? Like, I get the rowdiness and the drinking and eating during the show. But they had, like, a stage, right? There was a pit where the actors weren’t. But I guess the idea is accurate if nothing else. And it’s fun, that clearly matters.

No, it’s mostly Shakespeare. “Back Room Shakespeare,” duh. They did one non-Shakespeare play a few years ago. But Shakespeare’s ideal. It’s so universal that you don’t need anything to do it. Just the few set and props that the script asks for, and the audience who will buy into whatever your doing.

It’s about empathy, I guess. I mean, duh. All theatre is. But that shared experience. Caring for each other and everyone working together to tell the story.

What, you don’t think they’re helping to tell just by attending and watching? I would check yourself.

BARTENDER gets a news update on their phone and checks it. They sigh. Pocketing the phone, they look back at the actors. The banquet scene is wrapping up.

BARTENDER is called over by another guest.

BARTENDER mixes the drink and hands it off to the guest. They place a sprig of mint onto the drink to complete it.

Speak of the devil, eh?

Lawrence leads the crowd in singing “All You Need Is Love.” BARTENDER continues to watch.

Back Room Shakespeare is committed to performing Shakespeare’s plays as they were intended to be heard: to a crowd of drinking plebeians, with only the barest of staging elements and the weakest of fourth walls. The location, a German beer hall named The Radler, is the ideal venue for this kind of performance. A large open space, with long tables and individual stools for the guests. People are also standing along the walls, sitting on the floor, leaning on the support beams. On the night of Romeo and Juliet, Back Room reported that they had reached capacity at the venue.

The show is naturally interactive. While some characters hew closer to the text as printed (as best they can, having one rehearsal), others are more inclined to ad lib and give the general idea of their dialogue. Tyler Meredith, the evening’s clear standout performer, is one of these people. During the scene where Friar John explains his failure to Friar Lawrence, he cracks a beer open and the foam flies out over the nearby guests. Juliet hands her coat off to one of the guests during her first scene and collects it two acts later. In the play’s climactic finale, the star-crossed lovers ended up dying with their heads in the lap of an audience member.

Romeo And Juliet performed for one night only on June 18 at the Radler, 2375 North Milwaukee Avenue. Admission is free, and more info on Back Room Shakespeare’s upcoming performances can be found at backroomshakespeare.com/chicago, or by sending them a message here.