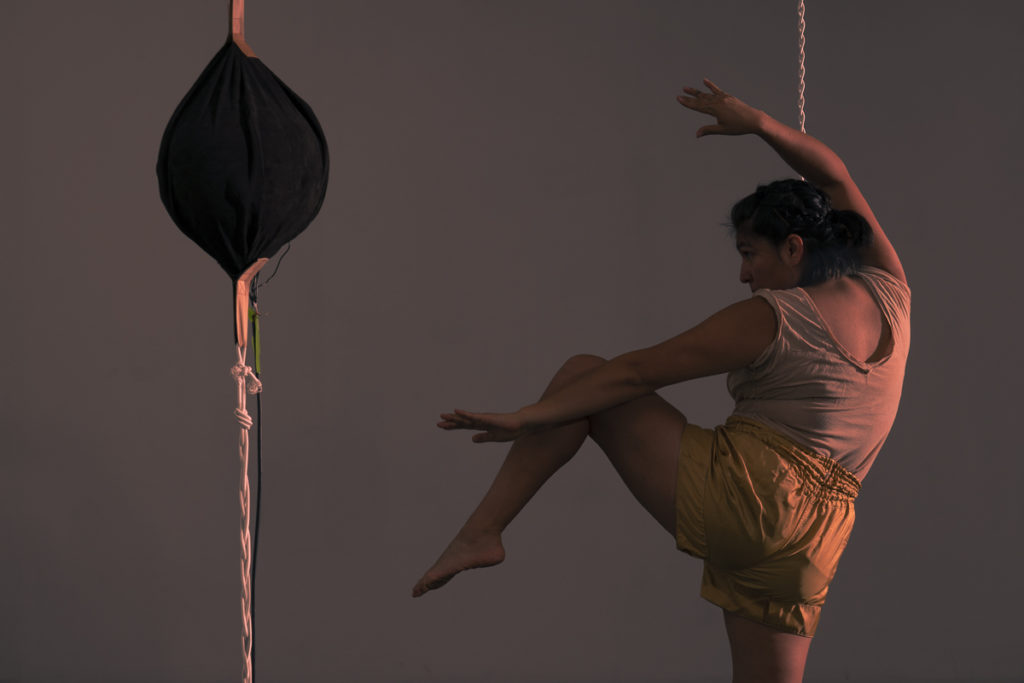 The Viscerality of Violence: A Preview Interview of POWER OUCH!

Alongside sex, violence occupies a singularly controversial position in art. Nearly every art critic of the 20th century, from Antonin Artaud to Susan Sontag, has had something to say about the ethics of representing power, pain, and cruelty.

“Of course, in art as in life,” wrote cultural critic Maggie Nelson in The Art of Cruelty, “pain doesn’t typically arrive wrapped up in neat boxes.” Unless we’re talking a boxing ring. Needless to say: the sensationalist and cathartic potentialities of violence make for a compelling yet loaded conversation.

In preview of POWER OUCH!, Scapi sat down for a conversation with co-curators Carole McCurdy and Aurora Tabar.

What were your curatorial priorities in organizing a performance art festival about violence?

McCurdy: I’d been exploring some personal questions about violence in Five Stud Stud, a movement-based piece I developed through various iterations last year, and became aware that other artists were working with the topic provocatively. Then, Aurora and I decided we wanted to bring these artists and their work together in a concentrated way, prioritizing what the human body can say about violence, beyond the rhetoric of language. Violence sprawls into so many areas of life, but it begins and ends in the body.

Tabar: Carole and I have both spent a lot of time engaged with butoh, a form of contemporary dance that embraces all aspects of human existence—from darkness to light. Personally, I am interested in the ways in which pain, suffering, anger, and oppression can be the catalyst for a kind of release or transformation. It is as if those experiences sit alongside transcendence. And there’s a possibility for healing there. I want to know more about that. We sought out artists who are exploring those ideas in a variety of ways—through movement, sound, storytelling, and sculpture, but ultimately with the body at the center of inquiry.

I’m interested in the festival title words “Power” and “Ouch!” and how they speak to each other in juxtaposed contact. Does power hurt? Is there power in expressing pain?

McCurdy: Yes, these are some of the questions these performance works are articulating physically. Pain is inevitable, but is violence inevitable? The festival’s title certainly plays on how use of power and use of violence can seem indistinguishable: this particular confusion can shut down other possibilities, and we are certainly living in a time of intense confusion.

The performances at POWER OUCH! promise to touch on many complicated societal conversations about violence in proximity to nationalism, toxic masculinity,  abuse, sexuality, and race. What do you hope audiences will take away from such an expansive and intersectional prism on violence?

McCurdy: I hope our audiences will come away with a sense of where they might look for options and alternatives in relation to violence in their worlds.

I find myself wondering about the audience’s role at the festival. Will they be bystanders? Witnesses? Spectators? Interventionists? Mediators? What degree of complicity and responsibility should audiences and performers expect in navigating violence together?

McCurdy: Audience members are free to choose their role in relation to what they see. At least one of the pieces will directly involve audience volunteers, but most of the works are about witnessing violence and navigating the shifting points of alliance, identification, resistance. So, yes, a sense of complicity and collaboration will be active at many moments.

McCurdy: Merely the warning that these works will represent violence and injury with physical presence and movement rather than with words, and that feelings will result.

In addition to more brutal topics of abuse, some performances on the lineup find more tender registers of bodily contact, such as vulnerability, queer intimacy, and even spirituality. Could you elaborate on how performance might reclaim or renegotiate violence?

Tabar: I think power and violence are very closely tied to intimacy and tenderness within interpersonal relationships. We hold people close. We push them away. We hurt and are hurt in return. And then from a social lens, we are the victims of violence/oppression, but we must also acknowledge our own complicity.

McCurdy: I think the vulnerability of performing for an audience is a powerful way of defusing violence: representing oneself as and with the other is transformation of energy that can open new ideas and encourage empathy.