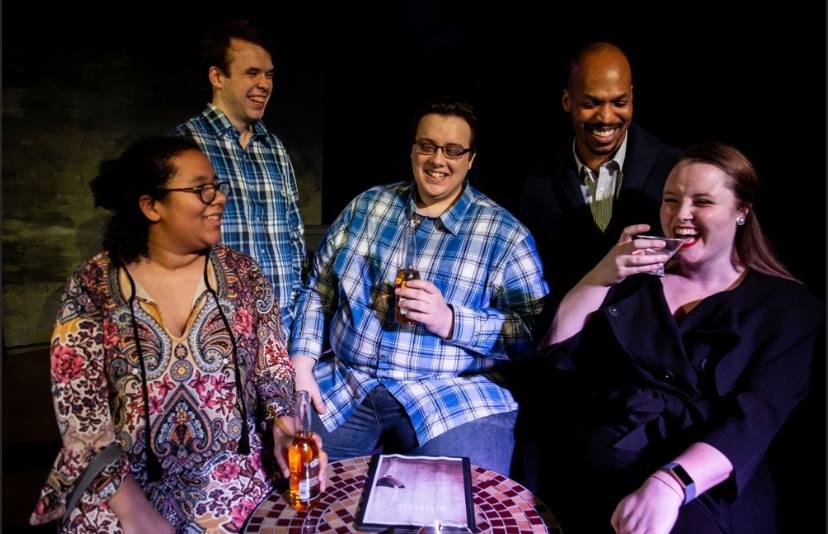 How Many Points for Wedding Cake?: The Calorie Counters Marries Physical and Psychological Love into One Delicious Concept

Pull out your Instagram–time for a pop quiz.

Raise your hand if you follow one of the influencers who promote body positivity and post photos of their nachos with a hashtag #lovefoodloveyourself or #cantbebotheredbyhaters. Now, raise your hand if, on the same feed, you follow a friend or celebrity who promotes a tight tummy tea or a high-intensity program meant to help you shred your bod in minimal time each day. The Cuckoo’s Theater Project wants us to confront this quandary in their latest piece, The Calorie Counters.

Twenty-something Maggie greets the audience with a mini-dance party while settling in after her day at work. She carelessly opens a packet of Blonde Oreos and surfs the web, all while jamming to a bubbly pop-tune on her headphones (re: Millennial Heaven). In an unceremonious beginning of the end, older sister Jordan announces her engagement and bequeaths the title of Maid of Honor on Maggie and sets her challenge – become a size 12 in under a year in the name of nuptial sisterhood and support. Veiled as a gift “for the bride”, Maggie, throws herself into the world of post-work gym sessions, weigh-ins, and as the title implies… Counting her calories.

When first introduced to the premise of the play, it sets itself up to be a fanciful wedding-romp down the aisle. Will she lose the weight; get the handsome groomsman; preach that beauty is in the eye of the beholder despite undergoing a dramatic physical transformation that eventually made her the winner? Playwright Molly Wagner had a different plan. Using unabashed honest and a vernacular that is too familiar to anyone who has ever faced weight insecurity, Wagner dives into the insanity that comes with defining the amount of space we take up and how we should feel about it.

“[This play] is meant to show what it feels like to be left behind,” said Wagner. She makes her point when dropping her leading character into the ether of physical uncertainty. When Maggie is unable to change her body to conform to her sister’s perfect vision, Maggie is removed from the bridal party altogether.

This play is a perfect example of our present uncertainty with how to live in the two worlds that we have created for bodies to reside in. We live in a society in which the options are to either be positive or be physically well. Trying to exist somewhere in the middle gives cause for pointed fingers, lashing out at the colloquial contradictions that come from trying to get the best of both worlds. After all, it is impossible to love how you look in a swimsuit AND want to do more push-ups. You can’t possibly indulge in a plate of pancakes for breakfast AND choose a light salad for dinner. You cannot love yourself AND want to take care of the body you live in. You either love yourself or hate yourself recklessly.

The conversation was loud and clear during casting. Leading actress Serina Johnston (Maggie) expressed her joy in being presented with an opportunity that spoke to her on a personal level.

“[Other playwrights] don’t write roles for me; not only as a big girl but a big girl of color,” said Johnston during an interview alongside Wagner and Melissa Golden (director).

Johnston went on to share that her experiences in casting mirrored those of Molly. Characters with comedic bits and little substance, characters twice their ages, old maids and lonely spinsters… All unwanted or banished members of society used for a sigh of comic relief. After too much time trying to find ways to identify with old women and witches in the woods, Wagner decided enough is enough.

In addition to pushing the audience into the uncomfortable world of weight, she also remembers to include demographics that don’t normally get the representation in the body positivity movement they deserve. Enter Charlie, Maggie’s man-identifying, male, heterosexual weight-loss mentor.

“We forget that men go through this, too,” Wagner shared. “Media (i.e. Marketing directives, influencers, ads) pretends that it’s a women’s issue, but it’s an inclusive problem that most people go through at some point or another.”

Director Melissa Golden takes the opportunity to point out the harsh reality in Charlie’s monologue; there is some truth in calling out a body-positive movement that, while intending on promoting self-care and value in one’s physical form, can also be misconstrued into an excuse to stop caring for yourself. In his experience trying to lose the weight, he has identified a layer of façade that comes with telling yourself that ‘you are perfect as you are’. In that state of being, he was threatened with onset diabetes and his romantic partner had voiced concern for his lack of interest in caring for himself. Charlie inadvertently points out the problem with ‘perfect’. In the world of sales and marketing, ‘perfect’ is used as a marketing tactic that forces consumers to feel less-than without the product being marketed, be it lotions or happiness. It also appears that with body-positive influencers using this term in order to reclaim it, they forget the amount of pressure that comes with perfection. The struggle that Charlie has faced is with this pressure, this anguish, and this impossible directive to be perfect in one way or the other. When, then, does it stop being self-love and start becoming self-destructive?

This is the most uncomfortable moment of the 90-minute mental work-out that is this production. Exposed and vulnerable, this show forces the audience to recognize that as a community, we currently do not know how to have a conversation around the balance between valuing one’s physical form and valuing one’s physical health. We’ve reached a point in the movement where the options are oversimplified and cyclical, and with what as the end goal?

Charlie and Maggie’s journeys prove that despite which side of the problem you come at it from, the journey to balance is undefined in the eyes of a community. Navigating an honest space between health and self-love is a growing and continuous conversation that is frequently overshadowed by ads and post the scream for your to dismiss the other side, because ‘what you want is what you deserve’. But what if what you want isn’t a yes-or-no-question? What if we truly want is a version of both worlds the actually molds to our individual needs? The Calorie Counters is an excellent reflection of the difficulty we have remembering that this space exists and that with reflection and appreciation for the experiences we have had, we can find our place between those options.

There is nothing wrong with creating health goals for oneself. There is also nothing wrong with loving oneself exactly as they exist today. The cast and crew of The Calorie Counters remind us that happiness can exist comfortably and unapologetically in the middle.

The Calorie Counters final shows are tonight, April 19, and tomorrow, Saturday, April 20 at 8 PM. Get more information here. The Cuckoo’s Theater Project produces works that expose the discomforts of human nature. By navigating the struggle as a community, they seek to find light within the darkness in the hopes of creating a brighter future. Updates on their 2019-2020 productions can be found at here.