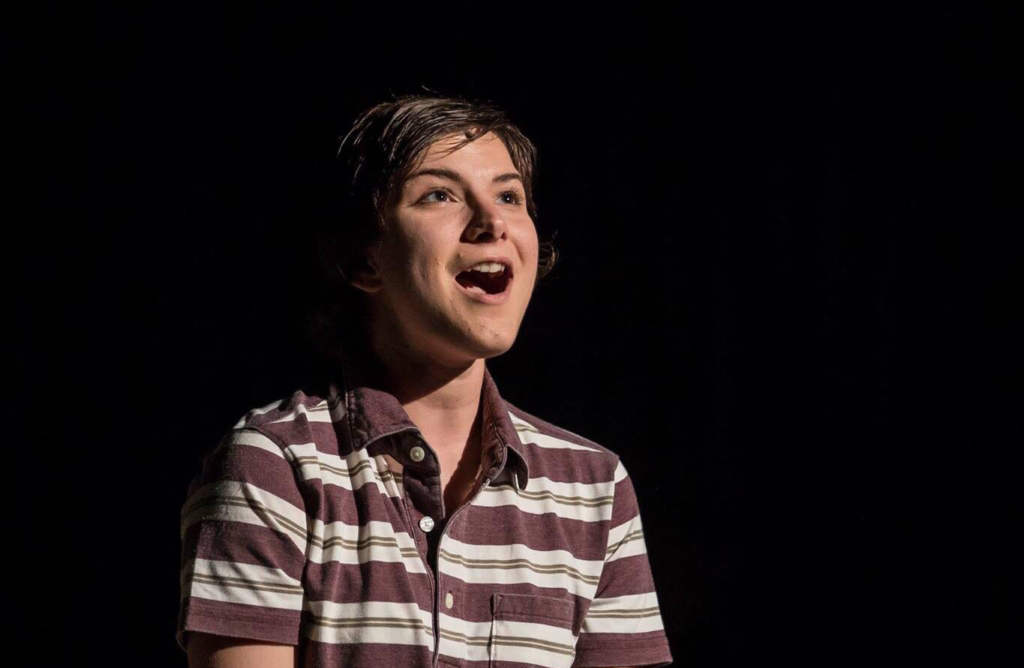 Previously, Scapi published an article on how venues can be inclusive for sober theater performers and audience members. Continuing the discussion, I asked performers what they wished they’d have known when returning to the stage. Here are five pieces of wisdom gleaned from restarting fresh.

1. If you’re an addict or new to recovery, it’s okay to not go to shows where you don’t feel safe.

Musician and visual artist Nire Nah has been there.

“Reliability relies on the sober person whether a space is going to feel safe or threatening,” Nah said. “Just know that it’s okay to avoid going to things. If you feel like you’re going to let somebody down, it’s okay. If you can’t ever go to a bar show, that’s okay. That doesn’t make you enfeebled.

“You’re going to find new spaces that you can enjoy, and like, bring your water bottle. If you can, bring a beverage that is going to make you feel that you can have something. It’s a big deal, to be self-sustaining and self-nurturing wherever you go.”

For concerts, actor and musician Emilie Modaff is glad to play, as long as they don’t have to stay long after the performance.

Going to see shows can be its own battle.

“I don’t go to shows because I’m very anxious,” Modaff said. “Drinking was my coping mechanism, so it’s just taking me a really long time. I didn’t expect it to take me three years, but it’s taken me a lot of time to overcome the social anxiety.”

2. If you are a recovering performer, build a support network.

Hannah Starr, a comic and actor who has appeared in the Victory Garden’s production of Fun Home and Second City’s The Gaslight District worked their way from a place of drunken improv to a healthier place within their community.

“It was incredibly difficult for me,” said Starr about starting to perform again as a sober person. “I was feeling like I didn’t really have a group because all the people I was collaborating with were very much in the drinking scene.”

In Starr’s case, good friends and structure help when starting to perform again. Having a supportive scene is good, but don’t wait for an art scene to change before you get help.

“It’s important to have a place to just vent, “said Starr.” Whether that be 12 step meetings, church, a knitting club, just having another group of people who completely understand what addiction and recovery feels like. Once it becomes more comfortable, it’s easier to start having community, a different kind of community, with people in the performance scene.

3. The bar after the show is not the only way to network.

But it is the most ubiquitous way. Pre-show or post-show drinking, unwinding, cast parties… it can be exhausting.

“I felt a lot of FOMO,” said Modaff. “I meditated all the time, and then went right home after shows. I still sometimes feel like I can’t go to a show where everyone is casually using. So I put all my energy into the work.”

Even in more professional theater settings, the idea of showing up, doing your work, and going home doesn’t account of the camaraderie that develops when the post-show hang out is at a bar.

“I was really worried for awhile that the real bonding happens after shows or after class at the bar,” said Starr. “And that’s true, sometimes that’s where projects are thought of and people start working together from that.”

But there are other ways to bond with people, Starr continued.

“I started creating my own shit, and it felt really lonely for a bit, but at least I was making something, and the more shows that I went to, I would see the same performers, and after enjoying each others sets, and after a couple different shows,  I would ask ‘would you like to work together’ and that’s a good way to start collaborating again.”

As long as you feel comfortable.

“Be direct about your standards.” said Tull. “And I think I’m a loud recovery bitch, and now people know that about me, and that’s part of why I started doing it… I got tired being offered drinks, I got tired of saying no thank you.”

And, Tull continues, remember it’s not just about you. Alcoholism is commonly associated with remaining anonymous, but unchallenged acceptance of being invisible can be a disservice to yourself and your sober comrades.

5. The Second “B” in BYO stands for Beverage.

“My amateur mistake was that I would show up early at a show and I would slam cokes like I would beers,” said Comedian Whitney Wasson said, “So I would have 12 cokes and then need to perform and I would go up shaking from a caffeine buzz and the audience would say ‘Oh gosh, that poor freshly sober person, they’ve got the shakes!’”

Wasson’s completely-sober variety show Serenity Now! gives space for performers in recovery in a non-bar setting. Tickets to the event come with a free can of LaCroix, a sparkling water beverage that has become an unspoken go-to beverage for many people in recovery.

Of the people interviewed, Modaff has a Pamplemousse La Croix-branded one-piece bathing suit and wants a La Croix fountain at their wedding. Nah will only drink it out of a can and no other sparkling water brand will suffice. Starr goes prefers passion fruit or apricot.

Tull dissents from La Croix fandom, but will gladly have someone buy her a Diet Coke.

None of these tips are a replacement of therapy, rehab, or 12-step programs, but everyone has to restart somewhere.

Serenity Now! will be at Crowd Theater on Saturday, May 18 and runs the third Saturday of every month. Show starts at 10 PM. Tickets are $10 and include a free La Croix.

See Hannah Starr Starr in Firebrand Theatre’s Queen of the Mist at the Den Theater, opening May 26 and running through June 6.

Em Haverty
Em Haverty (they/them/theirs) is a freelance writer for Scapi Magazine. They are also a writer and performer of personal essays, solo pieces, sketches, and is known to design a puzzle from time to time. In addition to writing about intersections in comedy at Reclaiming Laughter, they collect old footage curios for the YouTube channel VHShambles. Connect with them on Facebook or Twitter.

Em Haverty
Em Haverty (they/them/theirs) is a freelance writer for Scapi Magazine. They are also a writer and performer of personal essays, solo pieces, sketches, and is known to design a puzzle from time to time. In addition to writing about intersections in comedy at Reclaiming Laughter, they collect old footage curios for the YouTube channel VHShambles. Connect with them on Facebook or Twitter.
More from ImpressionsMore posts in Impressions »
More from UndergroundMore posts in Underground »