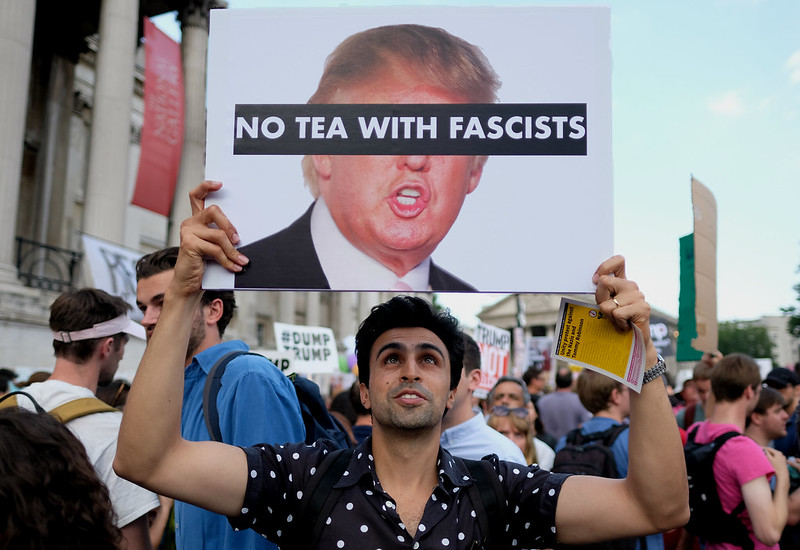 It is Not the Time for Bipartisanship

I’ve spent a lot of time ruminating on this time in American political history and the age of Trump. At this point in time, I’m pretty squarely in the camp of actively distancing and otherwise combatting right-wing ideology in America, and it’s hard for me to get behind a candidate in any office not working in that vein.

I think the notion that whoever the democratic nominee is should skew toward the Republican party is negligent at best. I think we’re looking at a time where a good deal of the Republican base is behaving in a fascist ideology with white supremacy and christian conservatism as the binding force.

Fascist movements feed on the insecurity of a group who feels they have been oppressed, they weaponize that insecurity and turn it into a galvanizing power that they then base their nationalism or supremacy around.

In America, that’s working class whites insecure about their job security (a fault of capitalism, by the way, not immigration) and Christians believing that their inability to police bodies that can give birth is an affront to their religious freedoms.

These aren’t talking points that American fascism is willing to budge on, so why are we?

In January 2020, a little over a month ago, more than 200 Republican members of the House and Senate filed a brief in the Gee case urging the justices to use it to overturn Roe once and for all. “Forty-six years after Roe was decided, it remains a radically unsettled precedent,” the brief said.

In March, the U.S. Supreme Court will hear its first abortion case since Justice Brett Kavanaugh replaced Anthony Kennedy, who had been the swing vote on abortion cases. A decision is expected by summer.

We’re also in a fragile time when it comes to immigration and human rights. In August, Trump set in motion gutting the central feature of the Flores settlement that began as a class-action lawsuit in California in 1985 and was settled 12 years later. It has since been used as legal precedent including standards on how and where kids could be detained, and also limits on the length of time that they could be kept incarcerated.

The rules made it clear that children had to be released from detention facilities “without unnecessary delay,” which, following subsequent litigation, came to mean 20 days.

These are tips of iceburgs of ideology so entrenched in the conservative psyche that any attempt to unpack them in time for the November election could be otherwise spent on voter turnout locally. Is it a hopeless effort? Of course not, but to build an entire political identity around centrism and moderate sensibility will not win in November.

I think if the history of fascism has taught us anything, moving to the center of a spectrum where one end is fascism is only giving power to fascism. To that end, the only way to combat fascism is to be actively anti-fascist. You can’t stand still on a moving train.

Fascism is ideological rot. It is fueled by hours of cable propaganda and incessant reassurances that you’re special, that you’re marginalized, that the only way forward is aggressive assertion of what you’ve been told to believe.

It is an infection on a limb that can’t be cured while in power. It must be cut off to better mend when the infection is no longer a threat to the rest of the body. To negotiate with fascism is to put the entire system at risk.

More from EditorialMore posts in Editorial »