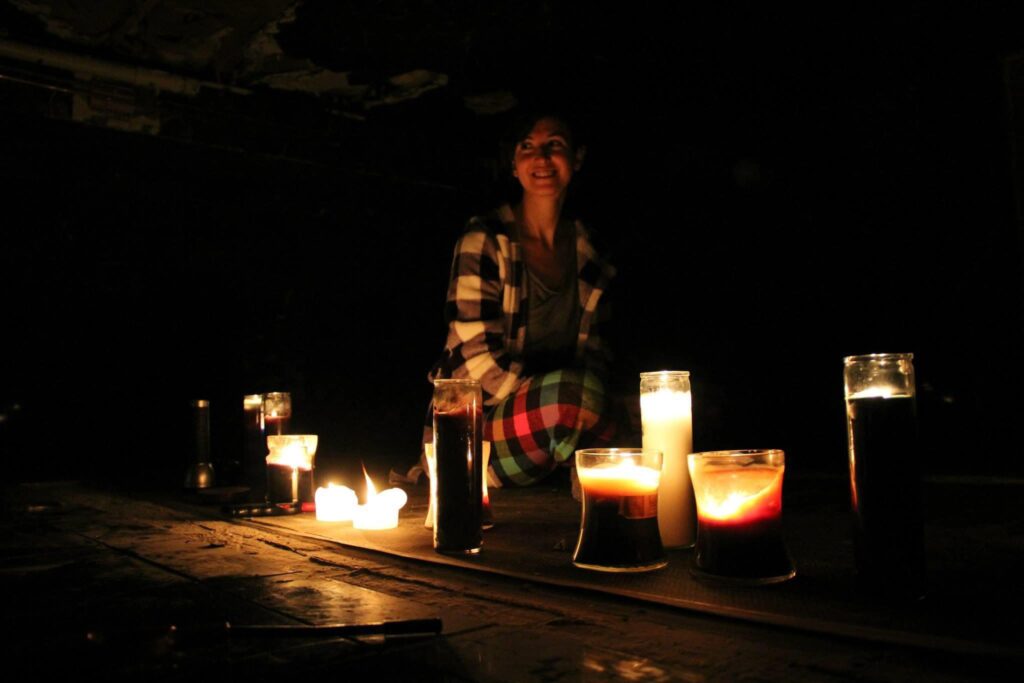 On The Grief of Relationships with Physical Creative Spaces

When I was 24, I was living the dream. I was running my own DIY venue: booking, curating, promoting, running box office, and clean-up after every event. I was paying my rent with the money I made, and I ran my own theatre company, The Runaways Lab Theatre, out of that space well enough to receive critical acclaim by outlets like the Chicago Reader.

That year granted me a crash course in the hard knocks of growing my audience organically, in-person and online. I, who had never really felt home in any community, found myself not only creating one but leading one in the great ecosystem of underground DIY houses and interconnected scenes all over Chicago.

Every deal I had ever made at “The Parlor” was a handshake, and everybody had been good on their word until my 25th birthday…

I made the mistake of renting to some freshman art students. They lied to me about every single detail. The cops busted their event just after midnight.

One of the attendees had drunkenly peed on somebody’s front lawn and one of our neighbors made the call. The fallout was part of what led to The Runaways’ latest show getting shut down for copyright violation, some toxic roommate drama, and general disgust towards our enterprises by the gentrification breeding around us. It became apparent that my beloved “The Parlor” was done. I moved out in May of 2014, and the grieving process began.

In the back of the basement was a small room, floor to ceiling green marble, with a hot tub in the middle, and a place for a camera to hang right above. Upstairs on the main floor was a 700 square foot gallery space. The bedrooms were in the backroom area and included a cubicle my landlord had cut out of the main space, so that we could have an extra bedroom.

We used every inch of “The Parlor” for performances. That cubicle, in fact, was once a pulpit for a comedy show courtroom drama by  performance artist and genius comic Ian Abramson.  That cubicle was also a backstage where an actress and a costume designer did 6 rapid fire quick changes back to back (Shout outs to Hope Barnes and Mikaela Von Merr for your incredible feats).

I fell in love with “The Parlor” because of all of the crazy things we did there and all of the people I crossed paths with every other day. By the time “The Parlor” got busted, we had produced events every day for a solid two weeks straight. It was how I got to know Chicago. When it was all taken away from me, it left a gaping hole in my soul.

It wasn’t until The Runaways picked me up off the ground and asked what project was next that I could see past my anger and resentment. Then I just saw the faces of the people who inspired me the most asking me to lead them. And I felt some semblance of hope again.

A year later, my “Parlor” and Runaways fans truly showed up for us when we put out a call for apartments across Chicago. We were seeking to rehearse and perform our production of “Faust” in a different apartment every night of the process and run, and because of all of those people, we were able to pull it off.

Experiencing “Faust ” in a completely sold out run with all these folx who wanted us making art in their homes reminded me that what I had fallen in love with was not four walls and a weird basement. It was my community that had grown out of all that.

Now it’s 5 years later, and I find myself in a similar situation. Some context: Since 2018, I’ve been Artistic Director of Prop Thtr, which has had a home on Elston near Kedzie and Addison for the past 15 years.

When I first found myself at Prop Thtr, during that run of “Faust” actually, in the apartment upstairs, I was struck by how familiar it seemed. It was the mom and pop shop of theatres. The people who ran Prop Thtr at the time, mainly Stefan Brun, radiated a kind of bohemianism and endless curiosity found in stories of Montemarte in the late 19th century or Paris in the 20’s.

Unlike most Storefront theatre companies in Chicago, Prop Thtr showed up out of nowhere, saw me for who I was aspiring to be, and invited me in without question. In these last 8 years I’ve lived in Chicago, I’ve realized that Prop Thtr and The Parlor are not anomalies. These kinds of spaces all over Chicago, not just on the North side, are what keep Chicago’s blood pumping.

Wherever people gather to see and engage with art and each other is a holy place, and the people of Chicago seem to just instinctively know that. Another tradition of this particular underground scene is that our spaces are taken from us by capitalism, by neighbors who call the cops, by f*ing life. Frank Okay, a local Chicago graphic designer/artist and friend of mine, is pretty well known around town for creating a yearly ode to Chicago’s underground spaces in the form of a gloriously detailed cartoon, and Frank always includes an RIP section. You know, for the venues that are no longer with us.

Am I mourning the death of yet another space that changed lives, especially mine? Yes. But do I think this is the end of it all? Absolutely not.

If losing “The Parlor” taught me anything, it’s that when you’ve lost it all and you’re tired and you’re unsure of how to proceed, all you need to do is look around you and see your community. They’ll be there. They’ll help you figure out that next project, that next evolution. And as spaces fall away during these trying times all over Chicago, more will inevitably pop up, and one day, we will all gather again (in person AND on the Internet).

The ecosystem of Chicago’s DIY and underground scenes and Chicago theatre will continue.  Not that it’s not already continuing on the Internet… Or right now, because you’re reading Scapi Magazine, and that’s basically like a DIY house on the Internet and you’re a part of that community so…