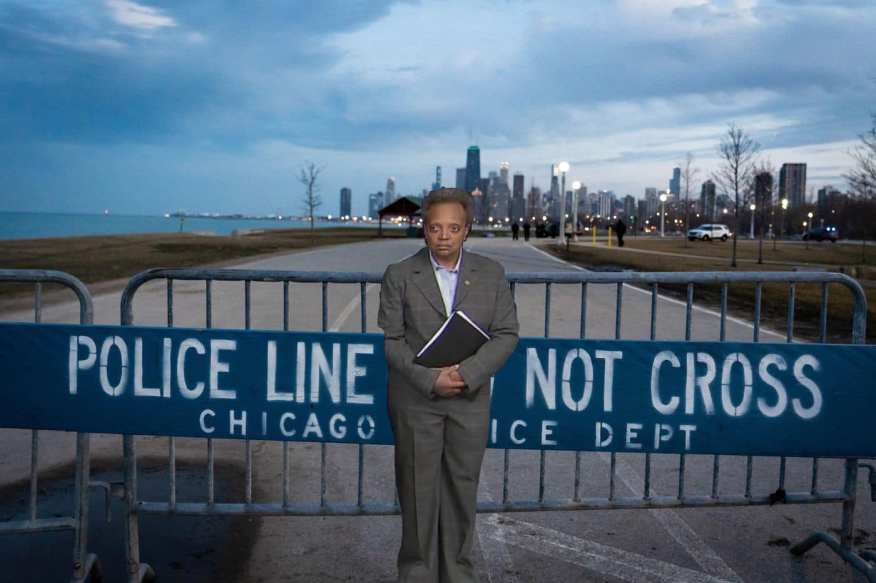 On Tuesday the Chicago City Council voted 29-21 to pass Mayor Lori Lightfoot’s 2021 “Pandemic Budget,” with individual council members’ decisions leaving fractures on the left. These fractures are mainly fueled by criticisms of Lightfoot’s police budget cuts not going far enough and a strategy to overcome Chicago’s deficit through a property tax hike and expanded ticketing and parking costs.

A block of no-votes came from Chicago’s DSA backed candidates who outline their distaste with these practices and report a negligence of inclusion in budget outlining with little consideration for a people’s budget.

“I voted no because this budget relies on regressive revenue measures like a $94 million property tax hike, new parking meters and ticketing rather than alternatives that would make the wealthy pay their share,” Rossana Rodriguez, 33rd Ward Alderwoman said in a facebook post alongside the DSA supported council members press statement.

“Alternative revenue measures proposed by my colleagues and I were never discussed openly. We desperately need a bold, independent City Council, and I’m grateful for my colleagues and the residents pushing us to do better every day.”

As reported by Injustice Watch, The mayor’s proposed budget includes an $80 million reduction in tax dollars going to CPD, but only about $34 million will come from cuts in vacant positions.

“If you really want to reimagine policing and move towards alternatives for policing, you have to do a lot more than just eliminate some vacant positions,” said Ald. Carlos Ramirez-Rosa (35th).

It does, however, include a pilot program for a non-police first responder system that was advocated for by DSA-Backed candidates like Rodriguez. Something like this hasn’t been attempted in Chicago before, but many advocates point to the Crisis Assistance Helping Out On the Streets (CAHOOTS) which has provided mental health crisis response in Oregon for the past 31 years.

As far as how voting results have affected public perception, a handful of progressive alderpeople are seeing blowback for reversing their stance on Lightfoot’s budgets from 2020 to 2021. These council members, including Maria Hadden (49), Mike Rodriguez (22) and Andre Vasquez (40) have been pointed to as upholders of the budget given the close results.

While many on the left oppose the property tax system as reductive to the interests of the working class, it is also true that many of the no votes that made up the 21 came from council members of wealthier neighborhoods that oppose any taxation on the wealthy.

“I want this council and this city to remember that last year, when a coalition of mostly Black and brown alders voted no on the 2020 budget, we were publicly targeted by a custom-built campaign website,” Vasquez said. “I do not expect we will see the same treatment of some of the committee chairs and other powerful, privileged white aldermen this year.”

Having said that, Vasquez is not without blowback from the left. In fact, being the only candidate who was backed by Chicago Democratic Socialists of America to vote Yes on the budget, the CDSA has turned around and decided to expel Vasquez from the organization.

“Ald. Andre Vasquez, a CDSA member who received the endorsement of the organization in the 2019 election, today cast a “yes” vote on the 2021 budget and sided with an austerity regime and the Democratic Party establishment over the interests of Chicago’s working class,” CDSA said in a press release. “The Mayor’s budget preserves the white supremacist power of the Chicago Police Department and further burdens working class people with regressive taxes and fines, which in a time of pandemic will lead to more displacement, debt, and death.”

CDSA also claims that this was not their first consideration of expelling Vasquez, levelling accusations that Ald. Vasquez has turned his fundraising over to the Chicago machine and real estate developers who fuel displacement and homelessness.

This also likely comes to no surprise to those familiar with the 40th ward race in which Vasquez unseated incumbent Patrick O’Connor. In a packed race for the 40th ward seat Vasquez was not CDSA’s first choice, they instead had backed Ugo Okere. The two candidates’ policies weren’t that far from each other at the time, in fact both were DSA members making CDSA’s backing after Vasquez won the pre-runoff election common sense.

In this, Vasquez becomes a figurehead for this post-election fracturings, with many wondering if CDSA will back a different candidate to unseat him in 2023. Whether this fracturing will prove emboldening or sectarian for the movement is yet to be seen.