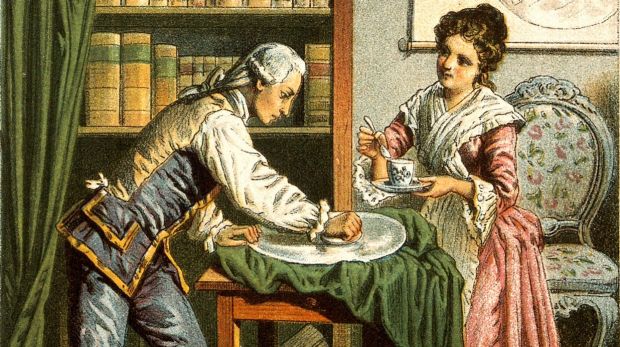 Men Explain Things to Me (In the Arts)

In the last year or so I have experienced a severe upswing of mansplaining in the arts community.

First, there was the guy in the Sondheim group who told me that if I thought Hamilton was good lyric writing, I needed to become familiar with a little musical called My Fair Lady.

Then, there was the guy in the Gilbert and Sullivan Society of Facebook, who defined “supernumerary” as “a character who is mentioned but never seen” and then told me that I was wrong when I suggested that this was not the traditional operatic definition.

And then there was the guy in the professional opera singers’ group who informed me that, well, actually, Rodolfo is the main character of La Bohème and has more to sing in Act I than Marcello, Colline and Schaunard.

This happens to me so frequently that I can’t help but wonder: is it me? I will freely admit that there are things I don’t know, even in my own industry and fields of interest. But when it comes to musical theater, Gilbert and Sullivan, and opera, I like to think that my opinions and information are sound. What is it about my identity as a young (though not as young as I look) woman in the arts that suggests to people that I don’t know what I’m talking about?

I think it is at least partially due to rape culture in the United States.

In response to many of the recent #MeToo posts on social media, as well as the recent spate of high-profile sexual harassment claims against celebrities like Louis C.K. and Kevin Spacey, a number of people have replied, “I believe you.”

Women are routinely dismissed when they report sexual harassment or rape; our expert opinions are not always believed if a man doesn’t step up to corroborate. In fact, in all of the instances mentioned above, my male colleagues and friends ended up taking over the argument and calling out the perpetrator.

Which brings me to my question: what is it about the arts in particular that invites this kind of mansplaining?

We are living in a time where people are suspicious of experts in almost any field because they are too elitist or too highly-educated, not like “regular folks.” High levels of achievement in the arts and years of practice and study are frequently pooh-poohed in favor of the latest 12-year-old singing “Nessun dorma” on national television. Singers who step in at the last minute at the Metropolitan Opera are often touted as “overnight success” stories, when the truth is more likely that they have worked at their craft for twenty years while working in an office or waiting tables at the same time.

We want instant gratification, we want youth and beauty; we don’t want to see how the sausage gets made, so to speak. President Trump’s planned slashing of the National Endowment for the Arts’ budget in 2017 betrays a devaluing of the arts to the point that money for the education and development of artists is no longer considered a national necessity.

If anybody can learn to be an opera singer from a Youtube video, why should we help musicians go to college or further their careers? Who needs a grant to study Bach or Mozart when anybody with a computer can learn more about them than ever before on the internet?

My experience with mansplaining in the arts has shown me that these men want the satisfaction of educating me and my peers, of teaching us what they assume we haven’t taken the time to learn because we are young and female. They don’t bother to find out that I have been a professional singer in multiple capacities since I was twenty-one, or that I’ve been a Broadway nerd since I was a child. They assume that I just don’t know, rather than considering that I might have spent a lifetime acquiring the information I’m offering.

When we disbelieve women who say that they have been sexually assaulted, we invalidate the extent to which most women have experienced this kind of behavior. For many women who have been raped or otherwise assaulted, these attacks represent only the tip of the iceberg of years of harassment, cat-calling, and discrimination.

Suggesting that a victim doesn’t know what constitutes sexual assault, or didn’t know the difference between assault and consensual sex in the first place, disregards the lifetime’s worth of first-hand information many women have gathered on the subject. I suspect that people just don’t want to know about it, because that would point to a more systemic problem than one woman’s rape.

In contrast, when the accusations against Roy Moore began to surface this month, Alabama Republican Party chair Terry Lathan said, “Judge Moore has vehemently denied the accusations against him…[h]e deserves to be presumed innocent of the accusations until proven otherwise.” Why should we believe him, but not his accusers? What is it about women’s voices, creativity and knowledge that invites doubt and derision?

Believing women, whether about sexual harassment allegations or about their professional expertise, should not be an attitude that breaks the mold. It should be the mold.