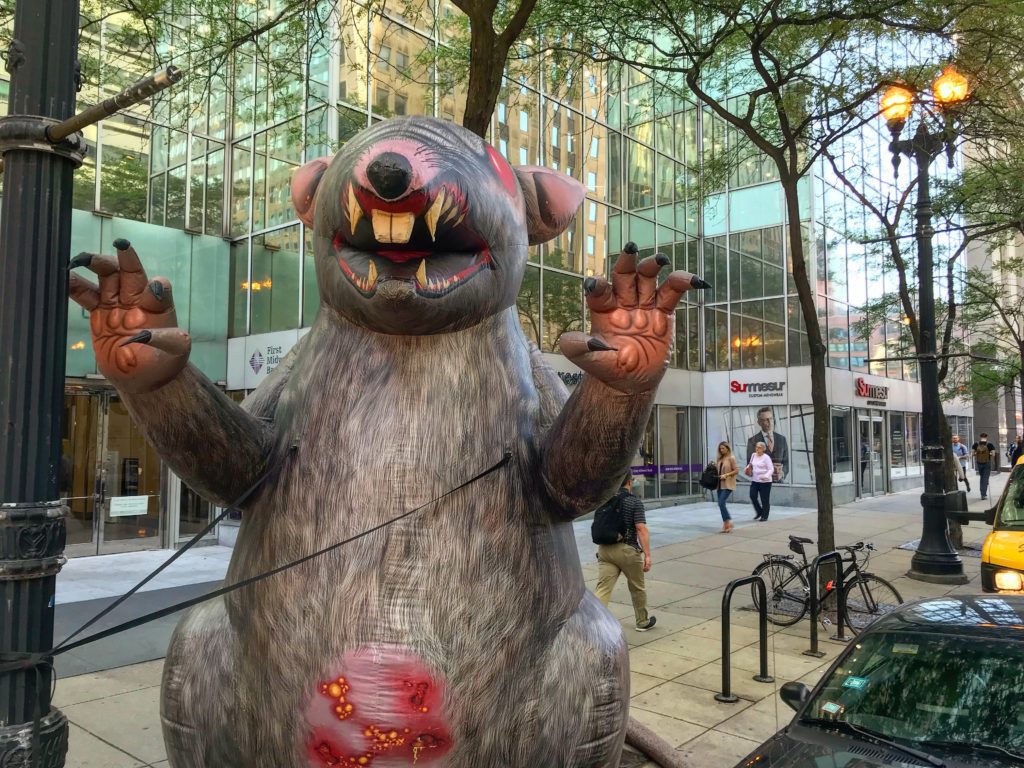 Why is Scabby the Rat Scabby?

As reported this week by the Trib this week, the National Labor Relations Board is revisiting allowing workers on strike to use the giant inflatable rat called Scabby. At this point it’s a Chicago labor history landmark, and a blatant metaphor for workers that cross the picket line.

The inflatable rat first made its appearance in 1990, commissioned by the bricklayers union in Chicago, it quickly became a staple of the labor movement in the city. Ever since,  Big Sky Balloons manufactures Scabby the Rat balloons ranging from 6 to 25 feet tall.

The reason for its namesake, the mess of scabs on the belly of each rat, is the real radical underpinning to the character of Scabby the Rat. It comes from the the figure of The Scab, an enemy in the history of Labor Organizing.

According to the archive of the Industrial Workers of the World:

It is for this reason that a laborer is so fiercely hostile to another laborer who offers to work for less pay or longer hours. To hold his place (which is to live), he must offset this offer by another equally liberal, which is equivalent to giving away somewhat from the food and shelter he enjoys. To sell his day’s work for two dollars instead of two dollars and a half means that he, his wife, and his children will not have so good a roof over their heads, such warm clothes on their backs, such substantial food in their stomachs. Meat will be bought less frequently, and it will be tougher and less nutritious; stout new shoes will go less often on the children’s feed; and disease and death will be more imminent in a cheaper house and neighborhood.

The term scab was first applied to a picket line crossing laborer in the 1700s, with the first recording of it dating to 1777 in England.

According to Mental Floss:

By the late 1700s, laborers adopted the insult to refer to workmen who wouldn’t join a strike, a union, or take part in organized labor. One of the earliest known recordings is from 1777: “the Conflict would not been [sic] so sharp had not there been so many dirty Scabs; no Doubt but timely Notice will be taken of them.” Early in the next century, “scab” became even more specialized and started being applied specifically to workers who crossed picket lines to take the place of striking workers, as in this testimony from the trial of striking Philadelphia bootmakers: “I concluded at that time I would turn a scab, unknown to them, and I would continue my work and not let them know of it.”

Ever since the term has been synonymous with someone that replaces a worker on strike. It’s purpose is to be grotesque and to be eye-catching, it’s meant to serve as a signal-boost for workers that would otherwise be lost in a sea of downtown concrete.

In 2011, the NLRB ruled that the inflatable rats were  legally permissible, allowing labor groups to use Scabby the Rat in a 3-1 ruling.

Now, an advice memo from the general counsel at the National Labor Relations Board says inflatables, including famed Scabby the Rat, should be illegal for unions to use in protest. As Gothamist reported, Peter Robb, the President Donald Trump-appointed general counsel for the NLRB, said the big balloons like Scabby are “coercive” and “unlawful.”

The fact that Scabby the Rat’s radical underpinnings have persisted into 2010’s brand of corporate neoliberalism is testament to the power of organizing in this city. Losing Scabby’s scabs for a more aesthetically pleasing rat or losing the rat altogether would be a huge blow to the tools at striker’s disposal.

If Scabby the Rat is a clear tool to communicate a message, then let it be so. Otherwise the issue that caused the scab in the first place may continue to be left neglected.