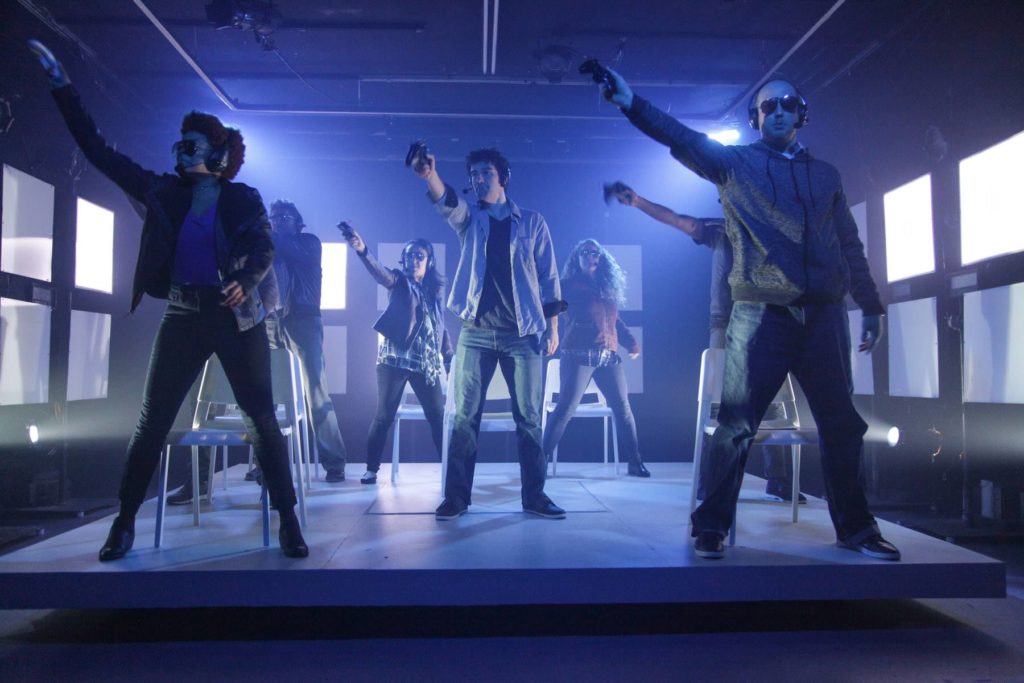 The End of Empathy (And What We Do Now)

Pictured above: The ensemble of The New Colony’s Fun Harmless Warmachine/Photo: Emily Schwartz

Is it overkill to write another op-ed about the state of the union?

On one hand, absolutely. Not only will another hand-wringing article about the breakdown of democratic institutions merely reiterate the issues at hand, rather than offer any sort of concrete solutions for fixing them, but to label the current American era as a “breakdown” is to gloss over the roots of these social divisions—roots that date back decades, and which have been oppressing and disenfranchising in the ways they were designed to, long before anyone with power took note of them.

But on the other hand, labeling the actions of a tyrannical administration and the social divisions it exacerbates as “nothing new in America,” and not worth commenting on, brings to mind that one Martin Luther King, Jr. quote, the one about the “white moderate”— a quote used with such frequency that its force as a weapon against white complacency weakens each January as it spreads across the Facebook pages of the “Woke.” There is a desire among everyone living in this country to say something, to do something. To demonstrate that we are part of the solution.

So we turn to the arts, which, reading any artistic director’s program notes in the last two years, you would be forgiven for thinking are the last line of defense against fascism. A slew of productions fying the “Now More Than Ever” flag have sprung up in Chicago recently, purporting that the best action to take when half the country is choking on lies and bias is a heaping dose of truth and honesty. Thus, we have productions like The Shipment at Red Tape Theatre, a harrowing and unashamedly hilarious satire of black stereotypes. Alternately, there’s the approach of Les Innocents (The Innocents), at (re)discover theatre, which proudly bills itself as “an immersive queer thriller,” throwing off the yokes of heteronormativity and proscenium staging that have been at the center of the culture for too long. Particularly unsung in my view was Chika Ike and Definition Theatre Company’s No Child…, a vicious takedown of the public school system and the way it has failed young students of color.

Theater is unique among the arts for its immediacy. It’s impossible to stage a play in any time but the present day. Even a revival of an older play can only be staged with the additional context of all that has come between its premiere and the minutes leading up to today’s performance. I will not make the presumptuous comment that these three plays—or any plays—were staged as direct protests towards the current administration. Rather, all three of their messages are important enough to warrant being heard during this, the previous or the next administration. But none of the artists working on these plays could have been ignoring the world into which they are thrusting their art. There is a reason that even the larger theaters in Chicago are producing works that double down on our collective empathy (sometimes misguidedly, but the impulse is there).

Are we changing anything?

In the same week that The New Colony premiered Fun Harmless Warmachine, a play that lays bare the recruitment tactics of alt-right online communities, the Men’s Right’s Activist group The Proud Boys assaulted three anti-fascist protesters in New York. As of this publication, they have not been charged with a crime. I am all but certain that audiences at The New Colony will be watching the play with newly strengthened convictions against the Proud Boys, and all alt-right activists. But a group that will likely not be watching Fun Harmless Warmachine? The Proud Boys themselves, or their supporters.

Far from it for me to blame The New Colony for not stopping all alt-right violence with one play. But the situation is emblematic of the larger issue: how can we, as artists, claim to be fostering empathy in our audiences, when empathy has itself become a partisan issue?

As artists, one of our unprovable faiths is the notion that our art matters—that it changes lives, that it can heal divides, that it fights for equity in the stories we choose to tell. I agree all this is true, but take that with a grain of salt. I am also an artist. All art needs an audience, and we put a lot of stock into the hope that our audiences will understand the message we are trying to get across and walk out of the theater changed.

But try as we might, we cannot select our audiences, and as Chicago theater doubles down on their social activism, we will turn away the very people who will most “need” to hear our messages.

How many Republicans, or even moderate right-leaning audience members, will go to see First Floor Theatre’s production of Mike Pence Sex Dream in the Winter? Is anyone who takes a blind eye towards the building of a border wall going to bother to see a play called The Abuelas at Teatro Vista? Even at the theater I’m on staff for, Sideshow Theatre Company, I worry that the presence of the word “gynecology” in the first sentence of our show description will vastly alter the sort of audience member we will bring in.

The apex of this is likely The Conspirators, who I deconstructed in an Expression back in June. Their play The Deckchairs (Or Make The Titanic Great Again) effectively prevented anyone uncritical of the current political climate from attending their show via the title alone. And yet, the play ended with a metatheatrical call to action to stop making jokes about the minutiae of the administration and start working towards genuine social change—a message directed towards the very liberal audience the play courted. And yet yet, here they come again, with Yankee Doodles: Let Treason Ring, which will continue to satirize in much the same manner. I will not be attending, for the simple reason that they told me not to at the end of The Deckchairs.

Have we reached a moment in the history of American arts where any desire to “open the minds” of our audiences is pointless? I don’t believe we are quite there yet, but the outcome of the midterms (and next year’s mayoral race) might affect my view.

So what can we do instead?

Well, not every theater company has the message of reaching across the aisle and opening closed minds. Often, the goal is instead to strengthen and embolden those who have been pushed down by a largely white/hetero/male/cis/rich/able/etc. power structure in the past. To provide a platform where stories that have been pushed to the margins can finally be heard. To be a safe space—or, as the term is being slowly redefined, a brave space.

Would any conservative-leaning viewer have their mind changed by The Fly Honey Show? Likely not. But what that production provides for so many queer, trans and non-conforming performers every year is invaluable. I’d never make the argument that it should be “reaching across the aisle” more. Not when the other side of the aisle has made it abundantly clear where they stand. Similar work is being done by the Trans Voices Cabaret and, on the page, by the folks at Rescripted and Chicago Theatre Now—and us, at Scapi.  When a space will not be provided for you, carve out your own.

So perhaps empathy might not be quite “dying,” as my clickbait title suggests. But it is shifting. In this time where the gulf between the two tribes of the country is widening so quickly, it’s time to pick a side and stay there. Put a foundation down and protect those who are most vulnerable.

Are there people who might read the description of Sideshow’s “gynecological” world premiere and decide not to go? The worse for them. In the paraphrased words of Angela Davis, “I am no longer accepting the things I cannot change.” There is another half of that quote. But it only goes so far.

I don’t accept the current members of congress, and I can vote to change them.

I don’t accept the majority-white recipients of the Jeff Awards, and I can advocate more strongly for those who did not win.

I don’t accept the newly emboldened voices of bigotry and nationalism in the public discourse. But how do we change that when we don’t hold power to silence them?

Until we do, perhaps the best way to live in this house divided is to strengthen our half, and ensure it’s not the one that falls apart.