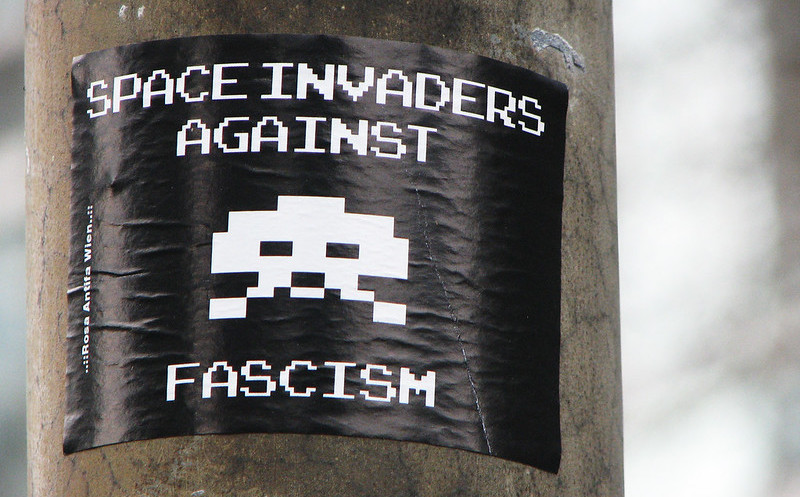 These Geeks Fight Fascism: The C2E2 Panel that Laid Out How We Got Here and What to Do About It

C2E2 as Space for Development of Thesis

The Chicago Comics and Entertainment Expo was last weekend, and one of its unique skills is providing attendees with so much to see and do, they can  really make of their time what they want. At C2E2, there’s a full schedule of panels, a floor of collectibles and gifts, an opportunity to meet artists, and a blur of stunning costume work.

C2E2 has found a way to develop many panels that explore a specific thesis and speak especially well to issues facing the culture. This was my third time attending C2E2 as press, and my most significant takeaway was the con’s ability to grow what it already does well.

On Friday,  I saw this growth in a tangible way. The first panel I attended was Queering Comics, Queering the Future, with a full panel of LGBTQ thinkers and artists who  spoke on queer identity in comic history and what it is to be queer and a part of fandom.

There, I heard something I’d heard at other panels in years’ past: while it’s important and certifying to have panels that focus on identity and representation issues, they are not the end of the conversation.

Queer and other marginalized voices need to be brought to the table to speak not just on the queer identity, but on what comics and nerd culture are talking about as a whole.

The last panel I attended, These Geeks Fight Fascism, showed that C2E2 is starting to think about this. There, I recognized a few speakers from past C2E2 panels, but hearing Dawn Xiana Moon and Michi Trota speak made me immediately think of the Queering in Comics panel.

Moon, a multidisciplinary performer and Founder of Raks Geek, and Trota, Editor-in-Chief of the Science Fiction & Fantasy Writers of America (https://www.sfwa.org/), were on what was probably the first panel I ever attended at C2E2, an Asian Representation in comics and nerd culture panel. I remember a similar thought that was presented: While it was amazing to see the effort, it wasn’t the end of the conversation.

What is Fascism and How has it Manifested in Nerd Culture

“It is a political philosophy or regime that rests on the idea of supremacy of one group, which is often based on the notion of race or nation with power resting in an authoritarian government headed by a dictator and enforced through various means of often violent oppression and suppression,” Trota said.

Although brewing for some time, fandom saw a large conflict with fascism during the events of GamerGate. GamerGate was an online harassment campaign beginning in August 2014. It targeted several women in the video game industry, notably game developers Zoë Quinn and Brianna Wu, as well as feminist media critic Anita Sarkeesian.

“GamerGate, that online campaign of bigotry, and you could hide behind your little avatars and spread a campaign of misinformation that’s targeting marginalized people, that came from ‘it was just about games, we just care about games,’ and a lot of people here probably lived that,” Karlyn Meyer, lawyer and former Chicago Nerd Social Club board member said. “It was something that targeted people and hurt people in a very specific way, and Steve Bannon pulled people from that movement to work for Breitbart.There was a very specific paper trail, so it wasn’t speculation about like, ‘is that why we got so shitty to each other on the internet?’”

As an event in cultural history, GamerGate, and Bannon’s harvesting of its rhetoric for media, hit lots of fascist notes. Facism requires subversive, everyday arms to help normalize any oppressive action an authoritarian government might want to take. To gain such ideological extensions, right-wing men like Bannon exploit the insecurities of subcultural groups.

In the case of GamerGate, Bannon relied heavily on exploiting the narrative of the misunderstood fan.

“That’s one of the things about geek culture, is that we remember being bullied for loving the things that we loved. It was not cool to really, really be into Star Trek when I was a kid,” said Dawn Xiana Moon. “So people come into fandom with a feeling of ‘everyone is really oppressing me’ and especially fandom historically.People of color and women have always been here, but the loud and public narrative is of white men. So you have a whole group of white men who are used to saying ‘Hey, I’m oppressed, what about me, I’m the victim’.”

Panelist Keidra Chaney has a theory on what really set the spark in this moment:as discussions moved from the cloak of online anonymity in online forums to sites like Twitter and Facebook, which had public profile pictures, the diversity in geek spaces became obvious.

“With social media you got to visually see that this person I thought I was talking to is actually a black woman, they’re disabled, they’re trans, like things that you wouldn’t necessarily make a connection about, now people had to visibly know that there were people who weren’t white men that were a part of the conversation, dominating it,” Chaney said.

Of course, when talking about fascism, it’s not enough to just say that you aren’t a fascist. You need to actively combat it.

“I’ll put it in fandom terms,” Meha Ahmed of WBEZ said. “We like our superheroes, right? A hero doesn’t just say ‘Hey, man, I’m not a criminal.’ They do something, they get up and struggle against it. You have to actively ask yourself how do I work against this thing, and what does it look like?”

This is true. We each need to act on an individual level, but also organize on a community level. In fandom especially, many people flock to communities online or in the real world where they can communicate and meet new people who share their interests. These spaces have to have protections in place to prevent harassment where possible.

“One of the things in talking about the anti-harrassment policies of [C2E2], there also has to be an anti-harrassment policy of whatever space you’re talking about,” Meyer said. “So for Chicago Nerd Social Club we had a strong online component as well as a strong irl event space. So what that meant is that we need to have these standards for online conduct as well as standards for what happens in person.”

“It’s easy to think that anti-harrassment [policies] is just making sure that, if people come in and start messing with stuff, there will be consequences,Meyer said, “But it of course has the flipside of letting people know that if you’re concerned about being marginalized, victimized, bullied, anything like that, knowing that there is something already set up, that there are people proactively thinking about how are we going to handle this.”