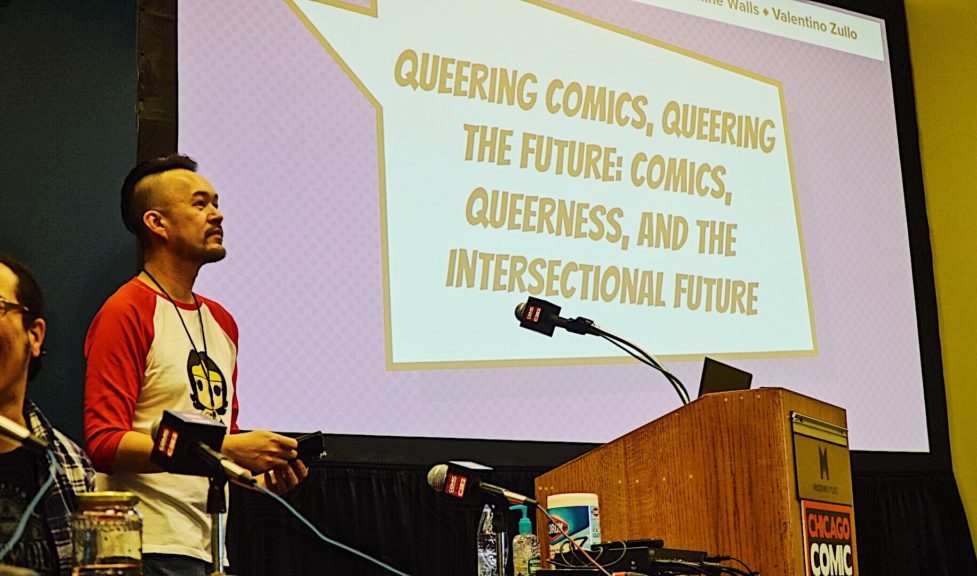 Queering Comics, Queering the Future: A C2E2 Panel About How it Can Never be “Too Gay”

Who said that comics can’t be serious, too?

Queering Comics, Queering the Future: Comics, Queerness, and the Intersectional Future was a C2E2 2020 panel dedicated to the history of queerness in comics, what that history meant for the future of comics, and how we could work to make that future better and more intersectional.

Of course, comics have always contained political material, but with the proliferation of the internet and social media, we now have a lot more visibility into the identities–and the intersection of identities–that comics and fandom should be representing.

(A brief aside — as many attendees noted on Twitter, (check out #queerc2e2) this panel was standing room only.)

The panel began with a brief but informative history of comics and why queer content in comics has generally been seperated from mainstream titles. While comics have always been political, and queer content had appeared as early as the 1930s, the 1954 comics code forced most quote-on-quote “subversive” content to go “underground” or “indie,” and only recently have comics been allowed to be more “adult” or “subversive.”

The panel was then asked about the first time they remember seeing queer representation in comics. Most of them admitted that their “first time” was either heavily shrouded in subtext, or, as mentioned above, found in indie, underground, or web comics. And though they did eventually find their representation in these places, not having it in the mainstream was difficult.

“I remember seeing my first comic, but not seeing myself in them; as a Filipino-American, there was just no one that looked like me,” Mark Martell said. “As I discovered what I liked, I also realized there were no superheroes that reflected my identities, and it’s hard not being able to relate.”

Of course, representation in and of itself isn’t the only thing that matters when trying to vitalize an intersectional culture. The panel also touched on the importance of having queer people and people of color write their own stories, which was best summed up by Jasmine Walls:

“Because that’s the only way you get accurate representation.”

On that note, Walls discussed her disappointment of what “representation” normally looked like, and how it was often flat, and two-dimensional, or worse, stereotypical.

Truly, it is one thing to be “seen” but another thing to be heard. Pamela Nuñez-Trejo also touched on the subject, and the importance of how these stories allow people to be humanized.

“More, now than ever, people of color and queer people are being dehumanized and they have important stories to tell,” she said. “It’s important for people to see them as humans.”

“I think visibility matters, right?” added Martell, “If you don’t see yourself in the pages, issue after issue, it makes you question who you are.”

After the discussion of why representation matters, the panel explored how social media has impacted the visibility of queer comics and access to queer communities.

“I would say that it kind of opens the floodgates against gatekeepers,” said Walls, “Suddenly the wall has been knocked down. Still, not everyone can get through, but definitely way more people can get through and it’s a lot harder to gatekeep it.”

Social media hasn’t just increased visibility of marginalized people, but also made communities more accessible for both artists and consumers to create and to find exactly what they want.

“I mean, it’s kind of exactly like you said,” said Aim Ren Beland. “It’s how you found us! Those databases are super vital, and the hashtags that come up ever so often are super vital, not only for connecting communities, but also connecting publishers to artists and writers. I’ve probably found the majority of my work this past year through those platforms.”

Social media helps creators create and audiences find art that represents them. Where does that leave the future of queer comics?

Well, that’s hard to say for sure. But the panelists definitely knew what they wanted to see.

“I would like to see it be less divided from just ‘comics.’ I don’t want it to be categorized as ‘queer comics,’ I don’t want ‘comics, by people of color,’ I just want ‘comics,’” said Walls. “The fact that ‘cis white male’ is the norm is the problem.”

“Just listen to people of color!” insisted Nuñez-Trejo. “If they’re telling you ‘this is not the right representation,’ or if you see Black people telling you ‘I don’t see myself in that,’ just listen to them, because it’s their narrative, and they know.”

Queering Comics, Queering the Future: Comics, Queerness, and the Intersectional Future was informative, fun, and both a great introduction to queer comics for beginners and an informative panel for those already entrenched in this world. The panel touched on several important subjects, didn’t pull punches, and was honest without being brutal.

But, the biggest takeaway from this panel?

Rarely does one quote so perfectly capture the feeling of an entire panel, but Nuñez-Trejo managed to do it.

If you’re interested in expanding your bookshelf, please explore the Queer Comics Database, where many of the panelists were found. Also check out the presentation from C2E2, which was made available to the public, or look up the hashtag #queerc2e2 for commentary.