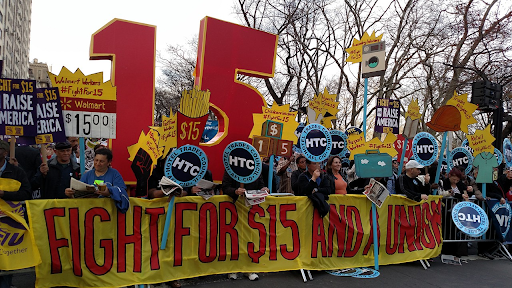 $15 Minimum Wage is a Vital First Step, But Not Enough

Biden has continually expressed his support for raising the minimum wage to $15/hour. With Democratic control of the Senate, passing a new minimum wage is both viable and vital.

Although upping the minimum wage is past-due and desperately needed, it is just the start. A minimum wage that does not keep up with changes in inflation will ultimately fall short.

Even with a minimum wage of $15/hour, that is not enough to support a family. With housing, healthcare, childcare, medical bills, food, elder care, and the myriad of other life expenses, it is not possible to make a living on that money.

Average rent for a one bedroom apartment in the US is just north of $1600, which would be two-thirds of someone’s monthly income if they work full-time on the $15/hour minimum wage. Most experts recommend spending no more than 30% of your income on rent. Anything more than 30% classifies as rent burden.

The list of unaffordable, essential expenses goes on. Average childcare can run from $750 to $800 a month. Health insurance for a family of four averages $1437 a month. Increasing minimum wage would do little to help those who are living paycheck to paycheck.

A federal minimum wage increase is important and necessary, but it cannot be the end all and be all. Wages need annual increases. A cost of living wage increase would also help curb gentrification that drives communities out of their homes. Not to mention, having comprehensive changes and adding universal healthcare and childcare, implementing rent control and affordable housing, free education and student loan forgiveness would be essential to addressing wage inequality.

Fast food workers in the US are striking on January 15th as part of the Fight for 15. Since 2012, the group has fought and raised the minimum wage to $15 in eight states, and has helped 27 million workers increase wages.

If, in fact, Biden’s administration is successful in changing the minimum wage, they will have a lot of fanfare and will pat themselves on the back. Meanwhile, they will ignore the additional changes needed to help those in poverty, the working poor, and all of the working class, while continuing to subsidize corporate welfare and the military industrial complex.

Little or no credit will be given to the activists who have fought for over a decade to make sure that the minimum wage is raised. As per usual, there will be plenty of work for activists.

The common refrain from the Democratic Party establishment is that progress is slow, compromise is paramount, and things cannot be changed overnight. Such a philosophy has led us to a nation where 1 in 8 Americans has gone hungry while billionaires reap rewards during a global pandemic.

The way a country treats its lowest paid workers reflects a countries values. The work that is underpaid, and often been considered as essential during the pandemic, is critical to our society. What does it say about a country that does not allow the dignity of living to our workers?
You can follow the Fight for 15 here.