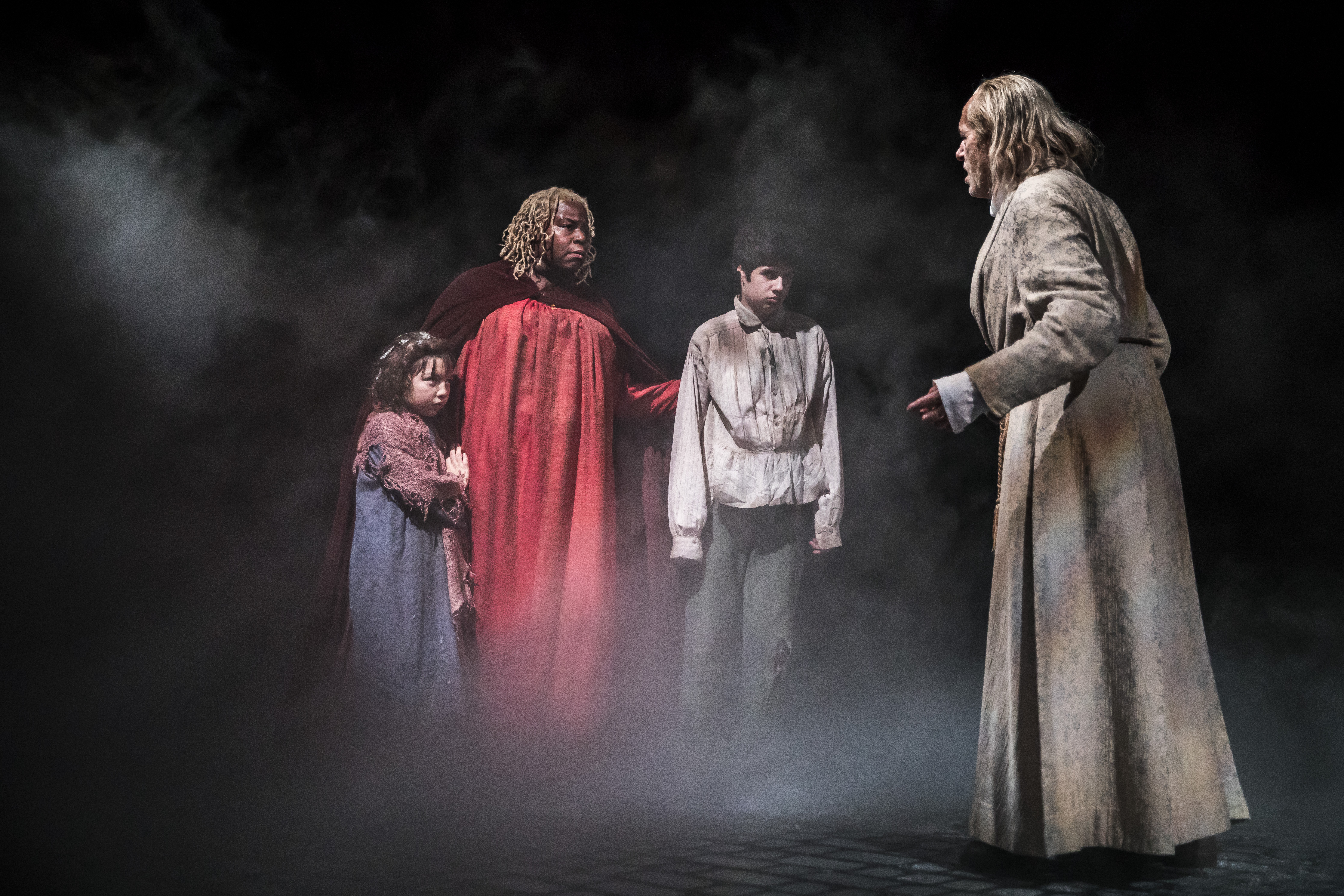 Goodman Theater stages A Christmas Carol with some twists

Few stories are as beloved and familiar to audiences as Dickens’ A Christmas Carol. When a theater company tackles a show so well known, a question it always asks itself first is: traditional or with a twist?

Both paths have roots which can trip up travelers. Traditional brings scrutiny and comparisons and high expectations, and the “twist” invites skepticism and the burden of proving the risk worthwhile.

So, which route does Goodman Theater take for its 40th anniversary staging of this classic? Mostly traditional, with a few detours to make the trip interesting. Most of the risks work, with a couple of
small missteps.

First, the risks that worked.

The three ghosts—of Christmas Past, Future, and Future—performed their duties to bring Scrooge (a brilliant Larry Yando, in his 10th year in the part) along on his arc of realization in entertaining and effective ways. The riskiest characterization, that of Christmas Past, played by Molly Brennan, showed her charge his childhood and his lost love from the sky, literally. The ghost was played as an acrobatic circus performer, gliding and flipping above the stage with grace and athleticism. She brought Scrooge with her in thrilling sweeps through time and space, and hovered over scenes where Scrooge was introduced to the traumas that made his heart hard. Her presence enhanced the scenes, and gave us in the audience comfort that Scrooge was literally being watched over. Particularly wrenching was the song by Belle (Sadieh Rifai), and particularly engrossing and entertaining was the Fezziwig party (overseen with humor and charm by Jonah D. Winston).

The Ghost of Christmas Present, played with exuberance and good humor by Lisa Gaye Dixon, was the most endearing of the ghosts. And, her guidance of Scrooge through the pain of seeing himself ridiculed at his relative’s Christmas celebration was warm and witty. We loved seeing her float down from on high, brightening the stage with thrown glitter.

The Ghost of Christmas Future (Breon Arzell) wasn’t a departure from the tall, faceless, voiceless specters we’re used to seeing show Scrooge where his meanness will lead him. The boom and echo of the sound effects of this being were properly scary, and we all felt Scrooge’s anxiety and introspection. Ghosts: effective, appropriate, and entertaining.

Another risk, one the Goodman has made mainstream in its years of practice, was its color- and gender-blind casting choices. While such casting decisions were groundbreaking years ago, they’re barely worth mentioning in a review short of recognizing that the Goodman has been one of the more notable institutions not afraid to break that ground.

What didn’t work as well as a risk was showing the audience a Scrooge who had some chinks in his hardhearted armor. Perhaps the decision to show Scrooge secretly liking the fact his niece gave him a Christmas present near the beginning of the play was a way to paint this grim character with a touch of warm humanity, to soften him some in the eyes of young audience members. But the reward at the end of A Christmas Carol is taking in a Scrooge who has made a dramatic character transformation, one from all humbug to all giving and warmth. When his transformation doesn’t go full spectrum, the payoff is less. But, even though we didn’t get as big a leap to redemption as an all-awful Scrooge can provide, the extraordinary skill of Mr. Yando in this role made the play a joyous experience.

A shout-out is due to the on-stage musicians who provided a beautiful accompaniment to dance and street scenes. Having such skilled live violin, horn and accordion players greatly enhanced the storytelling. And, we were fortunate enough to be in the audience on the night all the past Scrooges were introduced and brought on stage, along with the artistic crew, by Goodman Executive Director Roche Schulfer after the curtain call. If the play itself didn’t soften the heart, this generous gesture certainly did.