The new Star Wars: The Last Jedi movie has apparently woken up more than just the Force.

I am an active member of several “nerd-culture” forums on Facebook, much to the detriment of my blood pressure—nothing can quite get me as riled up as a good nerd culture fight, such as which X-Men movie was better written, or which actor should have played Ned Stark in GoT. Lately, I’ve had to surrender all forms of sodium due to the overwhelming masculine fragility that the new Star Wars movie seems to be drawing forth.

Recently, a male forum member made a comment along the following lines: “Yeah, the new Star Wars was good—I mean, it was well-written and I generally liked it–but there were so many women in it. When did movies start including all these women??? I feel like it’s just a phase Hollywood is going through and it feels so contrived…”

I, of course, started to crack my knuckles in hopes of taking a chunk out of this guy’s misguided ass–but instead of verbally launching myself at him, I took a step back, did a little research and considered for a moment:

Look—it isn’t just him. There really are more women being written into nerd culture movies such as Star Wars these days.

I’m getting ahead of myself. Let’s go back a few years.

I have always been a huge X-Men fan. I loved the strong women in the storylines, and I particularly came to love the saga of the Phoenix character, a female force who could swallow entire suns and destroy galaxies at her whim. So you can imagine my disappointment when Marvel failed to come through with anything remotely resembling this storyline in their X-Men: The Last Stand. Seeing Phoenix’s kickass, power-hungry presence reduced to a female that “knew not what she did” and who eventually required rescuing was worse than upsetting—it was personally infuriating.

I felt as though someone had robbed me of something much-loved and cherished from my childhood. This is how I imagine most men who are openly-bemoaning the newest Star Wars film must be feeling right now: lost, slightly bewildered and possibly even betrayed at the direction their beloved series is taking. The problem is, there isn’t any real rationale behind this.

The male-outcry against a burgeoning tide of feminism started rearing its ugly head this past year. The summer of 2017 saw box offices dominated by the release of Wonder Woman. This movie followed on the heels of an advertising campaign that forced Warner Brothers under serious scrutiny: Shana O’Neil, an author at Blastr, publicly pondered whether or not the studio was keeping its foot off the gas because the movie featured a superheroine and “the presumed target demographic” might not be as interested, openly questioning if WB wasn’t giving Wonder Woman their full attention and advertising efforts because it wasn’t a movie specifically geared towards “fan boys.”

According to O’Neil, sexism in the nerd culture starts at the very beginning—with basic advertising efforts to attract audiences. Ironically, Wonder Woman fared FAR better than Batman vs Superman and completely trounced the super-flop of Suicide Squad in terms of box office profits.

What took everyone—O’Neil, the studio and audiences in general—by complete surprise was the enormous aftershock of female awakening that seemed to take the world by storm. Women of all ages reported openly weeping after the movie’s now-infamous “No Man’s Land” sequence: seeing a female character take charge (quite literally!) in such a manner had previously been unheard of. The nerd culture became “woke,” and while some audience members were extremely receptive and enthusiastic about the changes, others swung nastily to the opposite: an “all-male viewing” petition for Wonder Woman in response to all-female viewing reveals just how much of a boy’s club American audiences remain.

One has to take a moment and consider: just what exactly are these men afraid of, under-representation in Hollywood?? No worries there—according to the Center for Women in TV and Film, only 52% of films created in 2016 employed 2 to 5 women; in contrast, 76% employed 10 or more men.  Wonder Woman may have kicked everyone’s butt in her movie, but in terms of representation, she’s on the receiving end —after all, she is still the only woman in the Justice League. 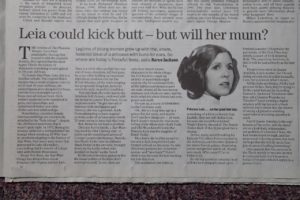 This brings us to the newest addition to nerd culture celluloid, Star Wars: The Last Jedi. Historically, many female characters written into the sci-fi/fantasy genre are generally relegated to one of three archetypes: a princess, a seductress or a mother. While there’s nothing inherently wrong with these archetypes, modern women have recently been voicing a desire to see themselves reflected more truthfully. As if hearing this outcry, the newest Star Wars breaks this mold with warp speed—the new additions of the female characters have been nothing short of incredible.

Let’s start with my favorite new character, Vice Admiral Holdo, a leader in the Resistance. Holdo’s character can be summed up in three words: brilliant, bold and feminine. For the first time that I can recall, young women have a female character in a major blockbuster that is clearly signaling to them that they can embody all three traits. No more metal bikinis and leashes (no woman would have suggested a metal bikini as a costume choice for a desert scene, as God only knows what chafing poor Leia must have endured during her time with Jabba…). Instead, these women feature feminine dresses and purple hair, and wield badass, no-nonsense authority–an active move away from the Hollywood stereotype that “strong female characters must be like the boys.”

Rose Tico is another awesome example of the series’ new-found feminine strength. Not only is she arguably the first woman of color that’s clearly visible in the series as a whole (did anyone else feel like Lupita Nyong’o’s character was visually buried on screen?), but she stands alone as an average person in the galaxy. She’s not blessed with the powers of the Force, she’s not a scrappy smuggler, and she’s not a princess on the run:she’s one of the dirtiest, least-sexy jobs a woman could possibly play—she’s a mechanic. She’s also a fabulous role model: here is a woman who has no formalized military training or fighting skills, but she fiercely believes in equality and justice. She’s an inspiration for any woman who has ever felt marginalized, overlooked, or forgotten, and proves everyone can have an active role creating an inclusive and hopeful future.

It’s worth pointing out to these male-exclusive fans that while the newest Star Wars does a fairly good job of actively working towards inclusivity, it doesn’t create any prickly points in the original plot line. The presence of Vice Admiral Holdo as a strong and feminine leader didn’t actively change the outcome of the final battle, nor did her storyline about putting up with a male underling’s ineptitude and struggle to accept female leadership detour the overall story arc. The film actually takes the time to develop the new characters rather than allowing them to flounder as ‘token’ portrayals, treating them the same way Hollywood has been treating male characters for years: as 3-D personas with strengths and weaknesses alike. Both the original and prequel trilogies had few if any female speaking roles, and only one female lead in each…and most of those roles were oversexualized or ridiculously underdeveloped.A single strong woman featured amongst literally dozens of male characters/coworkers is under-representation at best and pure tokenism at worst.

I personally find it a little ironic that all of this representation has been rocking people’s minds.  Suddenly seeing so many strong females on screen may have just “awakened” the American audiences to female presences in movies in general.  Maybe it truly was Wonder Woman’s popularity that started opening our eyes to more female leadership, or it might be that the writers were finally feeling like they had been granted permission to write for stronger female characters—after all, the original Star Wars book series features a plethora of strong female leaders that are either granted minimal screen time or not mentioned at all.

Even with all this progress, Star Wars still remains very-much a man’s Universe.

Despite the new president of Lucasfilm, Kathleen Kennedy, declaring that “bringing more diversity and representative casting to Star Wars was essential to the franchise’s future,” it’s impossible to ignore that the franchise still hasn’t hired a woman director for any of the films. As the series grows and develops, fandom and nerd culture might struggle to catch up—but one can only hope that eventually, they will. The overall reactions to characters such as Rey hold up a beacon of hope amidst the darkness that one day, we might see equal representation…in a galaxy not-so-far-far-away from our own.

For more of Emily Cox’s writing, including the extended version of this article, head to her blog here