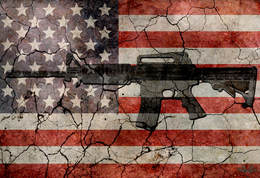 On Sunday Night in Las Vegas, a gunman opened fire on a country music concert murdering over 50 people, the largest mass shooting committed by a single person in United States history.

As details continue to come in, there will be a call for people across the nation to police how this is discussed, whether the issue “should be politicized,” “thoughts and prayers,” etc. One narrative setting itself up early is the idea that the shooter may not be a terrorist, but instead a “lone wolf.”

This is a racially coded piece of rhetoric and is part of the problem. Implying that the shooter had mental health issues of some kind, and that led him to the shooting.

This is a problem. This furthers the idea that those folks with diagnosed mental health concerns (anxiety, depression, ADD even) are to be feared.

Not calling it terrorism was the first move out of the gate for the Las Vegas police department as people lay dead.

“We have to establish what his motivation was first,” Las Vegas Sheriff Joseph Lombardo said. “There’s motivating factors associated with terrorism other than a distraught person just intending to cause mass casualties. Before we label with that, it’ll be a matter of process.”

Not calling it terrorism is a means to not equate it with foreign terrorism. Recognizing the influence of a post 9/11 America on this moment is crucial as we realize that the right has taken the rhetoric of patriot vs. terrorist to further their goals.

According to the Constitutional Rights Foundation, The Patriot Act defines “domestic terrorism” as activities within the United States that involve acts dangerous to human life that “appear to be intended–
(i) to intimidate or coerce a civilian population;
(ii) to influence the policy of a government by intimidation or coercion; or
(iii) to affect the conduct of a government by mass destruction, assassination, or kidnapping”

This recognizes clearly that the Las Vegas Sheriff and many other police departments across the country use these guidelines when labelling something as terrorism. The Patriot Act, written in fear after the devastating attack of 9/11, is now the guidepost for which we assess all domestic violence on a public scale.

For me, this is a mistake. An issue can’t be made to be political, the world we live in is inherently political. The politics of this day are dictated by people’s needs and wants.

When the Patriot Act co-opted the word terror to only include acts deemed “political” enough, it robbed the American people of its abilities to communicate its fears. The fact is that terror is terror. You know it when you see it, and the idea that over 50 people being shot and killed isn’t inherently intentioned to instill terror is insulting to civilian life.

I think that the Patriot Act at large needs to be readdressed. I think that when events are terror-filled, we should call them terrorism.

Published in Editorial, News and Opinion