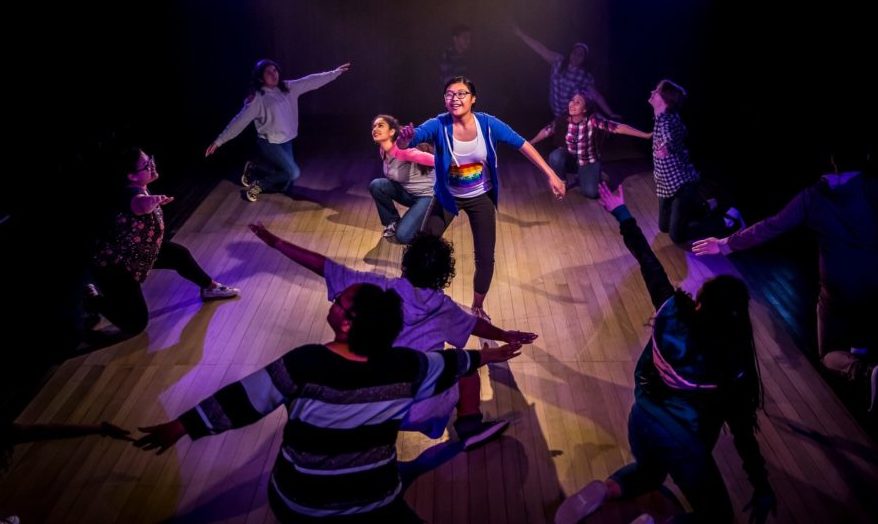 I Come From…: An Expression in Response to Ofrenda

Editor’s Note: This is an expression in response to Ofrenda in the form of a free-written journal entry by Nick Benz; Ofrenda, written by Isaac Gomez, is performed by the Albany Park Theater Project at the Laura Wiley Theater at Eugene Field Park.

An offering of self

An offering of honesty and vulnerability

An offering of celebration for our immigrant communities

Rooted in the generosity of storytelling, Isaac Gomez’s 85-minute world premiere production weaves together a series of vignettes showcasing a complex cross-section of immigrant communities both within the Chicago and larger global communities.

The production finds its end in a refreshing way. An ensemble member moves to break the fourth wall and asks the audience to now become an active participant in the cultivation of their story; to engage in the act of storytelling. Empowered with a pencil and paper, the audience is given the opportunity to explore through their own act of composition the question:

In honor of the artistry and successes of APTP’s newest production, I would like to make my own Ofrenda. My own offering. The handwritten text below is sourced from an unedited free writing in response to the prompt “Where do you come from…” as presented as part of the above-mentioned closing ritual of the Ofrenda performance. I would like to offer this to you now, presented unedited. My journaled response to this question; My Ofrenda. 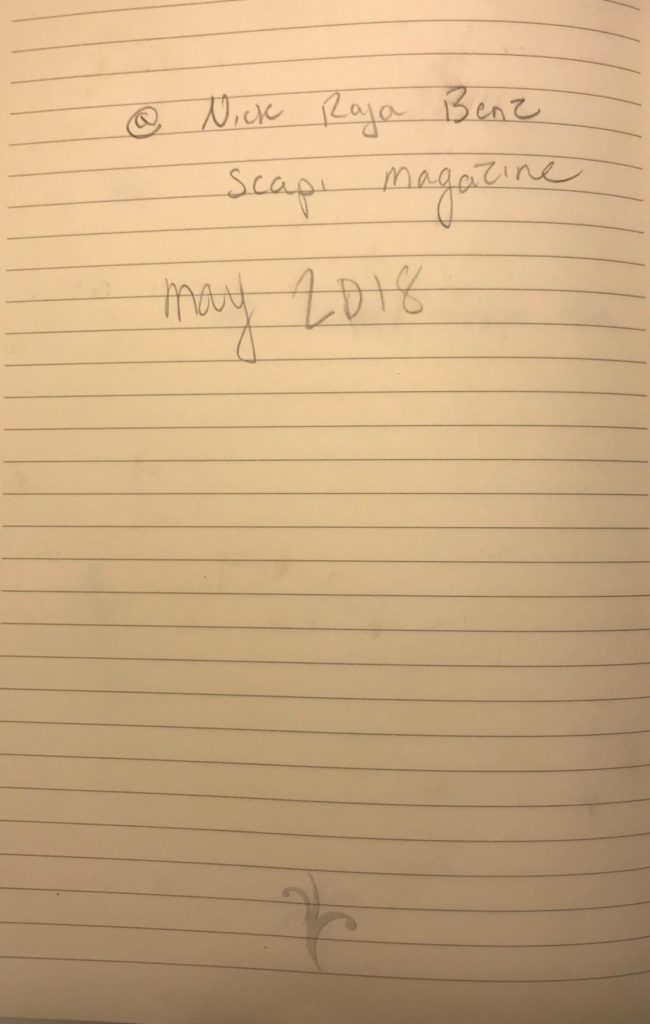 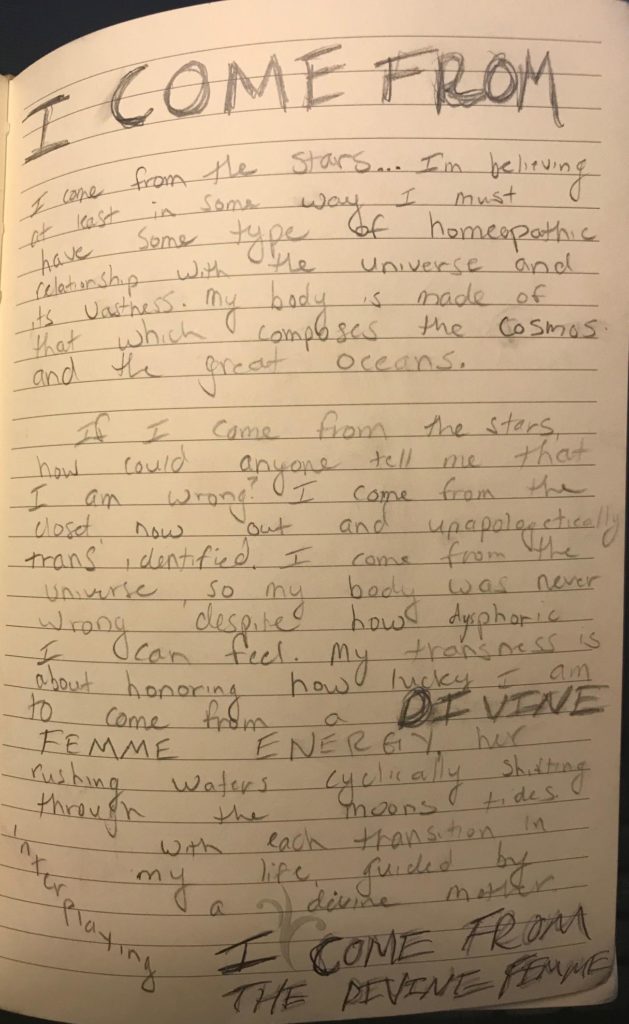 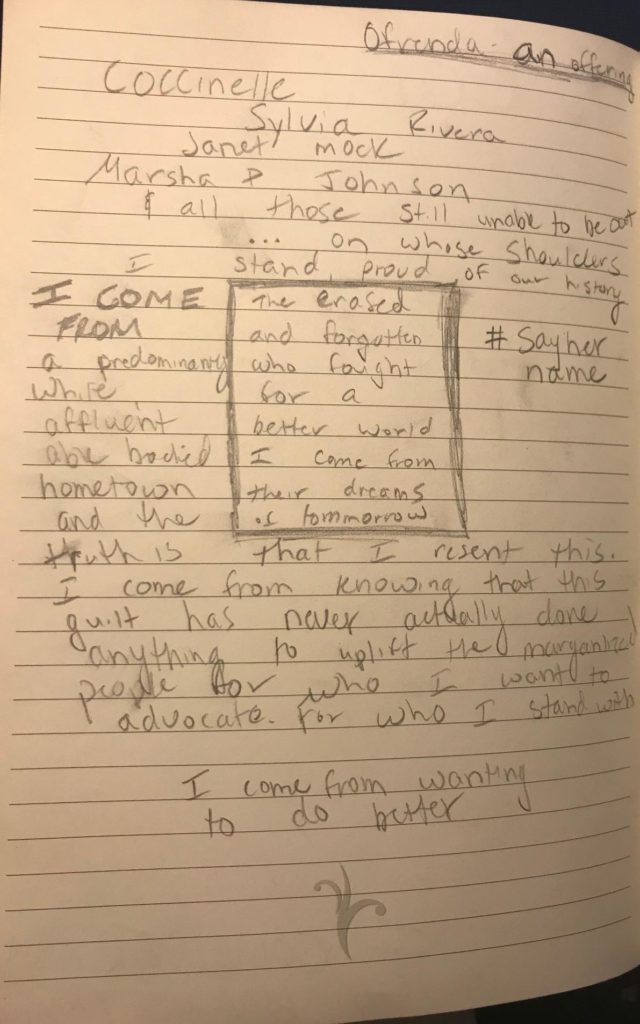 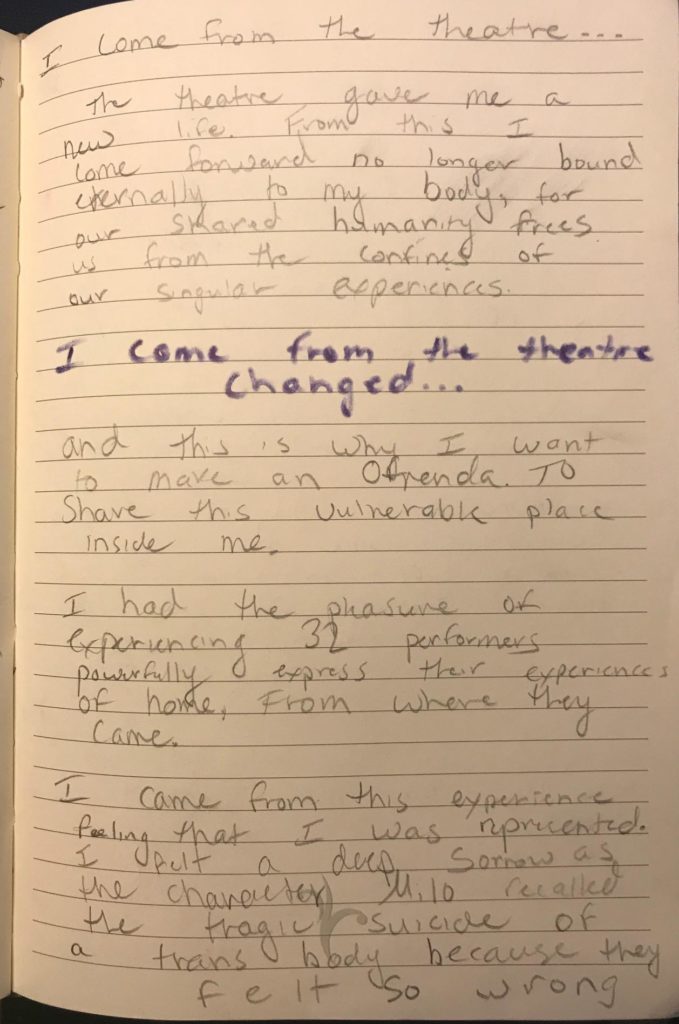 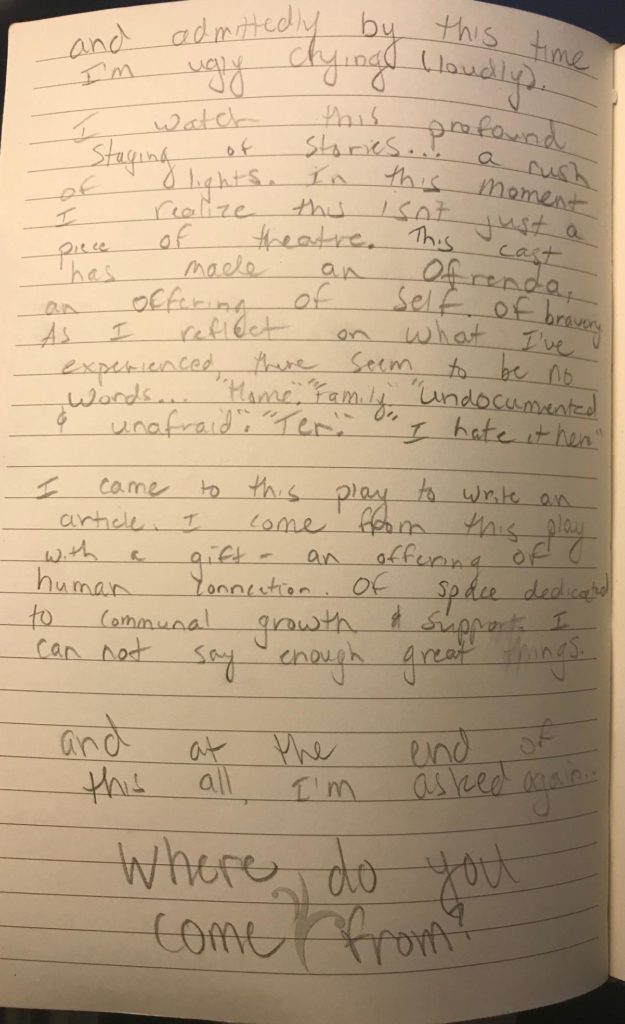 Editor’s Note: Below is the accessible, typed out version of the unedited, free-written text.

I come from the stars… I’m believing at least in some way I must have some type of homeopathic relationship with the universe and its vastness. My body is made of that which composes the cosmos and the great oceans.

If I come from the stars, how then could anyone tell me that I am wrong? I come from the closet, now out and unapologetically trans-identified. I come from the universe, so my body was never wrong despite how dysphoric it has made me feel. My transness is about honoring how lucky I am to come from a D I V I N E  F E M M E E N E R G Y… her rushing waters cyclically shifting through the moon’s tides [I N T E R P L A Y I N G] with each transition in my life, guided by my divine mother. I COME FROM THE DIVINE FEMME

& all those still unable to be out

…. on whose shoulders I stand, proud of our history.

A predominantly white, affluent, able-bodied hometown and the truth is that I resent this.

I come from knowing that this guilt has never actually done anything to uplift the marginalized people for who I want to be an advocate; for who I stand with.

I come from wanting

I come from the theatre…

The theatre gave me new life. From this, I came forward no longer bound eternally to my body, for our shared humanity frees us from the confines of our singular experiences

I come from the theatre

And this is why I want to make an Ofrenda (an offering). To share this vulnerable place inside me.

I had the pleasure of experiencing 32 performers powerfully express this experiences of home. From where they came.

I came from this experience feeling that I was represented. I felt a deep sorrow as the character Milo recalled the tragic suicide of a trans body because they

and admittedly by this time I’m ugly crying (loudly).

I watch this profound staging of stories… a rush of lights. In this moment I realize this isn’t just a piece of theatre. This cast has made an Ofrenda, and offering of self. Of bravery. As I reflect on what I’ve experienced, there seem to be no words…

I came to this play to write an article. I come from this play with a gift, an offering of human connection; of space dedicated to the communal growth and support. I can not say enough great things.

And at the end of

This all, the cast asks me again…

Where do you come from?

Ofrenda, co-directed by Stephanie Paul and Maggie Popadiak, features a diverse cast of 32 performers from the ages of 13-18.

“It is a gift to work with powerful strong youth,” Paul said. Paul then described the processes as an opportunity to create work that encourages youth to claim ownership of.

Paul views the show as one way to pay honor to the resiliency and strength of our immigrant communities who despite all odds form and create community despite the resistance and struggles unique to being an immigrant.

“The show is about honoring and celebrating the resiliency and strength of the immigrant community, who against all odds are able to find and build a home when doors are so often being shut in their face,” Paul said.

Published in Expressions and Opinion